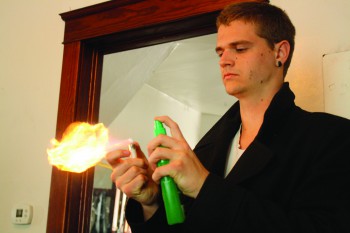 In light of John D. Roth’s call during convocation for the construction of a new “Martyrs Mirror,” I would like to make my own challenge to the status quo by soliciting a new mascot for Goshen College.

I recognize that the Maple Leaf has been a staple of Goshen College athletics since its inception in A.D. 1525 by Felix Manz while he was being arrested, but is it not time to move on? We as an institution must break free from the lengthy reign of the Maple Leaf and embrace a new emblem, the Goshen College Flaming Martyr.

For centuries the Maple Leaf has been a sign of Goshen College prowess on the field, court and diamond. From Dirk Willems rainbowing the keeper to win the conference title, to Paul Keim balling on some fools, to the current volleyball team beating Taylor twice in one season (that’s right, twice!), the Leaf has been an inspiration throughout the ages.

But lately the Leaf has come to represent wispiness and bad grammar (What is the whole “Leafs” thing about anyway? It really should be Leaves), a change which has shamed its former glory.

That is why Goshen College athletics needs a new token, one of power and heat and just a bit of sacrifice. The Flaming Martyr embodies all of these concepts and adds even more history. While the Maple Leaf refers to the city of Goshen and its many maple trees, the Flaming Martyr refers to the even richer history of Anabaptists in Europe. In such uncertain times we must keep our identity through this eloquent talisman of selflessness and incineration.

Therefore, I suggest that we, as a student body, offer up a call to our athletic director, Tim Demant. Tim, ole buddy, we need a change. We would like you to begin the process for a mascot change from one flammable token to another. We need less of the breezy Maple Leaf and more of the oxygen-fueled Flaming Martyr.

Now is the time for renewal and a Flaming Martyr will certainly fuel the fires of our athletes to victory. Imagine the possibilities! Every home soccer, volleyball, basketball, baseball, softball or football game we could substitute a new ritual in place of the national anthem; dousing a Mennonite student in gasoline and lighting them on fire. Now I recognize that this exclusive practice might just reinforce the so-called “Menno Wall,” but after a year of testing we could also open it up to students who are not of the Mennonite faith, bringing everyone closer through fire. I’m sure this new solidarity would bring about a successful new era in Goshen athletics.

After all, a mascot makes a team.