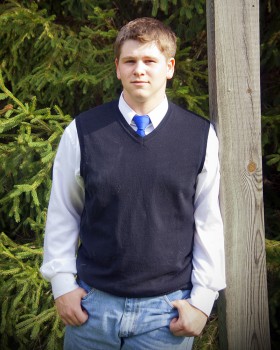 Seth Wesman ponders why he would want his personal quirks on reality TV.
Photo contibuted by Seth Wesman

I will admit (quite proudly) that I have never watched an entire episode of “The Bachelor” in my life.

I did, however, watch part of the recent episode where they went to Wrigley Field, but only because I’m a helpless sports geek.

I know very little about the show but after a quick Wikipedia search and from my own assumptions I have concluded that I would make for an incredibly entertaining and ratings-grabbing contestant on “The Bachelor.”

1. Natural good looks: Let’s be honest here, who isn’t looking for a 5’8”-ish guy who can’t grow a beard and will be carded until he is 45? Also, my Beatles-esque haircut is pretty solid.

2. Affluence: Apparently these guys are super rich, which I am not. But hey, Pop-Tarts and ramen are a pretty good meal. And who doesn’t love bonding over bottles of Sunny D?

3. Smooth talking: This is definitely where I would shine. My conversationalist skills would dazzle anyone I talked to…about sports. “I don’t mean to brag, but I can list every Super Bowl winner in order and who they beat.” Try to restrain yourselves, everybody.

4. Natural grace: See the Post-It note in Howell keeping track of how many times I’ve tripped on the stairs.

5. The Rose ceremony: Does this happen every episode? If it does, roses seem boring. If we’re going to have the very odd ceremonious eliminating of a person, why not make it fun? The people allowed to stay another week would be presented with golden retriever puppies because that would be adorable.

6. Memorable experiences: I may not be able to get anyone into Wrigley Field, but Ohio State football coach Urban Meyer once sneezed on me, so that’s something.

7. Personality: (See point 3). No seriously though, I’m a fun guy who can talk about anything, even non-sports stuff. Like Star Wars, or TV, or the music the kids are listening to these days, Calvin and Hobbes, Bernie Sanders and the rest of the hip stuff.

8. Discussions of the future: I’m assuming this happens, so I will say that I once held a Mormon baby for the majority of a flight from Columbus, Ohio to Phoenix, Arizona and he didn’t cry once—so yeah, I’m pretty good with kids. I may have been terrified the entire time I was holding him, but that’s besides the point.

9. Big decisions: Twenty-five contestants start—wait, what? Twenty-five? I can barely interact with one girl, let alone twenty-five! *crawls into a ball on the floor*

10. Personal interviews: From my housemates’ Snapchats I have gathered that this is a thing that the contestants do (#TeamLace whoever the heck that is). I can imagine the responses would be quite humorous—“Why is he wearing a Spiderman onesie?” and “Is he actually crying over his March Madness bracket?”

11. The hometown visits: Does this include my hometown? I’m assuming yes, so here’s Lehman’s Hardware, and here’s some fields, aaaaaand that’s it.

13. My heart-meltingly quiet demeanor: This one’s real: I’m like an adorable church mouse.

14. The final ceremony: Obviously, such a big occasion calls for something a little bigger than a puppy. So I’m thinking we go with the “winner” receiving a whole litter of Husky puppies while Counting Crows plays “Accidentally in Love.”

And there you go. Would you watch this season of “The Bachelor?” Probably, since people for some reason already watch this ridiculous show.