Half-full, half-empty, or on the ground in pieces

It may sound unlikely, but various individuals have recently begun strongly hinting that my time here at Goshen College is coming to an end.  The usual threats aside, this concerns me rather a lot.  For one, I had always assumed my greatest unfinished business here at Goshen was either my major or some shadowy, nameless Gen Ed the syllabus of which our president would hand to me in lieu of a diploma.  I’ve hit my own thumb many times in the process, but I’m certain I’ve nailed both these things solidly into their coffins.  It’s turning out, though, that I have quite a few things left to do here.  These consist primarily of finding the Chamber of Secrets but I also should really finish off my Munch money and Java Bucks, not to mention every last penny of my print money.

But one of these things I’ve left myself to do is the writing of this, my final article for the Record.

It has been an otherworldly journey from fall 2011 until now.  When I ask myself if I feel ready to move on, my immediate answer is no—what have I even done since I got here?  …besides setting the fire alarm off during my own ML event (it really did bring people together though).  Surely I can’t be leaving, I haven’t done enough here (yes, yes, yes, “enough damage” hahaha, got it).  But then the stories start flooding in.  I might not feel ready to move on after just four years, but I’ve got enough stories for many times that long.  Maybe it is a glass half-empty and half-full.  Filled by what, exactly?

Here’s one story.  It’s one of my favorites and unfortunately sums up a surprising amount of my experience at Goshen College.

It all happened about a year ago.  Eight of the finest people I know and Stefan Baumgartner were living at Howell House that spring semester.  Howell House had a tradition of sorts, a house meal every Saturday.

Every week we subjected ourselves to the culinary mercies of two of our number.  Every week we gathered and sat down at that colossal kitchen table.  Every week we would join hands and awkwardly wait for Bobby to start the food-blessing hymn.  Every week we would go around the table in an unbearably exhaustive exposition of the previous week’s highs and lows alongside a hope for the next week.  And every week it would miraculously be over.

It was a Saturday like any other…  At this particular meal, I sat at one end of the table.  To my left I believe was an empty seat.  To my right, Katrina Evans, who’s name has not been changed to protect her identity.

The food was passed around and the dreaded “rose, bud, thorn” talk swept the table like an unwelcome specter.  Conversation waxed and waned, ebbed and flowed and gradually neighborly discussions took the place of full-table talk.  From afar I reclined, absently sipping water, my only contributions to the conversation taking the form of the sort of mindless, eye-roll-worthy comment I am known for.

After some time, we were all sitting a little lower in our seats.  That pleasant, after-meal drowse was beginning to set in.  The table seemed at ease.  All was well.

And then, in a moment, it changed.  I quietly said one of my trivial witlessicisms, a comment that I do not even recall the nature of.  What happened next will haunt me until my dying day.

In an instant, Katrina had turned to me, eyes flashing dangerously.  There was no hesitation.  In a single, swift motion she reached out, hurling a glass off the table.  It shattered against the wall.

Deafening silence as hearts tried desperately to start up again.

The ruined fragments of the glass lay scattered over the floor.  Any sense of peace or security we had felt was likewise shattered across the linoleum.  Unthinkable violence and destruction had visited upon us in the midst of tranquility and calm.

To this day, no adequate explanation fits the facts.  In her defense, Katrina is a nursing major, but that is no explanation for why she so unexpectedly snapped.  “I was just going to hit you on the arm,” she has claimed on numerous occasions, but with little conviction.

This is the type of story I will always remember from Goshen.  I am far from ready to leave this place, it’ll be a lot more bitter than sweet.  But the cup is neither half-empty or half-full in this case.  It is completely full of wonderful, beautiful, small, large, powerful, boring, laughable, cryable, ground-breaking, whispering, all-too-numerous stories.

But of course it’s also just on the ground in pieces. 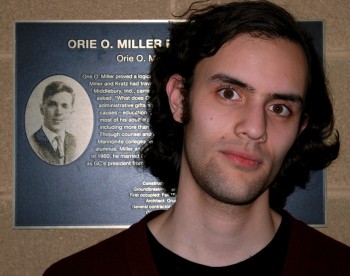 The now defunct Miller Residence Hall and its namesake “Oreo” will forever be fixtures of many an escapade at Goshen College.