Spring Mainstage: The Boys Next Door opens doors this weekend 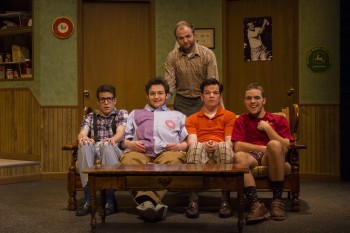 Every night this week, the students involved with the spring mainstage will gather in Umble Center to put finishing touches on the play “The Boys Next Door.”

Set in New England in the 1980s, the play examines the lives of four intellectually disabled men, played by senior Brett Conrad, juniors Paul Zehr and Ben Ganger, and sophomore Jesse Bontrager, and their caretaker, played by junior Martin Flowers. Students began putting the play together months ago.

“A lot of us were reading the play last semester and getting acquainted with it,” said Flowers.

Because the play deals with mental health, the cast has put a lot of thought into their portrayal of the characters. Conrad said, “If we do it right, which is much more challenging, but I think much more rewarding, it would be more of a celebration of these people living with these disabilities.”

As part of their research for the play, the cast has been working with Mennonite Disabilities Committee (MDC Goldenrod), a community of developmentally disabled men in Goshen.

“When we were first talking about doing ‘Boys Next Door,’ it was fundamental to me that we were going to do it as a collaboration between organizations,” said theater professor Doug Liechty-Caskey.

“They go bowling every Thursday at 3:30, so we have found a few opportunities to go hang out with them and go bowl with them,” said Flowers. Conrad added that developing these relationships has been important in the development of his character.

“They kicked our butts,” Flowers added.

In addition, MDC Goldenrod has surprising similarities to the apartment depicted in the play.

“This is about a home for four mentally handicapped individuals, and MDC has a very similar setup, where there’s houses with six men inside the house,” said Conrad.

The play, according to Flowers, is “quite funny, and heart-wrenching at times, as well. Funny, I should say, in a way that is not making fun of the men, but grows out of the situational humor of it.”

Liechty-Caskey said he hopes the play will prompt the audience to think about global citizenship at home.

“With any of our close neighbors who are different from us, we have the same responsibility as we do in Peru or Cambodia or Tanzania, to reach out and connect across those differences,” said Liechty-Caskey. “Not because we have to become all just like each other, but because every human has dignity and is worth getting to know.”

The show will open this Friday, March 20, at 8 p.m. Since the performance is part of senior Melanie Hertzler’s senior show, a reception will follow the first performance. Hertzler is stage managing the performance. Flowers and Conrad agreed that people who work behind the scenes, including Hertzler, are essential in bringing the play to life.

“These are the people that make us look good,” said Flowers.