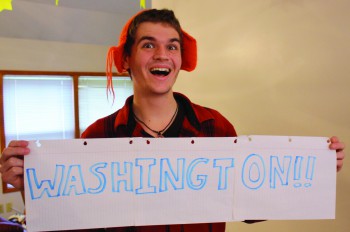 Following the recent success of the new Kansas club that met for the first time two weeks ago, local outsider Brian O’Leary decided to start another state club: The Society for the Advancement of Washington Students, or SAWS.

The group met for the first time at 1 a.m. on Sunday in East Hall. The meeting consisted of the roll call, of one, being taken by O’Leary, followed by a long session of the popular video game Skyrim, and finally concluding with O’Leary aptly falling asleep while in the lonely city of Winterhold.

Later the debacle was declared a success based on the acquisition of three levels by O’Leary’s character Ronin. Witnesses described the event as mildly humorous, but mostly depressing. When asked how the get together served any purpose, O’Leary commented, “I had a blast! Plus I think I really got the word out about Washington with all the other players on Skyrim.”

Said O’Leary’s roommate Daniel A. Barwick, “I guess he still thinks that Skyrim is an online game. It was pretty awful to watch him trying to talk to an Xbox.”

Following the event, O’Leary’s housemates took a vote and in a unanimous decision chose to never again let him do anything, ever.

“We’ve really got to put a stop to all this nonsense,” said Ashley Fehlberg, a senior. “It’s gotten to the point where any plans he makes end up with him playing a video game and falling asleep. It’s really bringing the rest of us down.”

When asked whether he had any future plans for the organization, O’Leary noted a meeting to be held Thursday in the bathroom. But fellow East Haller Angela Bishop commented, “He’ll probably just conk out on the couch.” And Fehlberg was overheard saying, “Meeting adjourned. Forever.”