Standing in awe of Lincoln 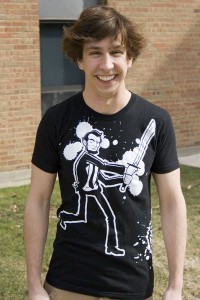 There is something awe-inspiring about being surrounded by huge buildings.

Not skyscrapers. They are impressive, but somehow too big to really comprehend.

I’m talking giant blocks of marble, granite and sandstone. These buildings, which surrounded me when I went to Washington, D.C. for spring break, have history and politics deep in their foundations.

Another student noted that simply being in D.C. makes one more politically aware. And though people who know me might wonder if that was possible, it was.

While I was surrounded by the giants of our past and present, I felt the weight of the years, the weight of important decisions, the weight of our democracy, in a way that I have rarely felt before. It is easy to take for granted our government when you are nowhere near it, but being there really made it palpable.

It struck me that we are so well off. Our system, for all its failings, is truly great. Think how improbable this nation is. At so many points things could have gone wrong.

George Washington easily could have decided that he liked ruling so much that he would become king, rather than president. Lincoln could have not tried to keep the union together. And as Joe Liechty might point out, each time that we peacefully transition from one party in power to another, we ought to remember how blessed we are.

Our government affords – and has for hundreds of years – an unparalleled experiment in democratic representation.

Being at a largely liberal institution with goals of peace and justice, I frequently get lost wishing that things were better. I wish that our country was more proactive. I wish that there was not so much poverty in this country. I wish that the many repressed groups in our midst would get a fair shake.

And as a result, I sometimes forget to be thankful.

That is not to say that I should stop wishing and more importantly, stop working for progress on such fronts. They are vitally important. Rather, I think that in the process of looking to the future, we should not forget to look to the past and be grateful.

I stood in the Lincoln Memorial reading his second inaugural address – a message from our nation’s past that could not feel more relevant today.

“With malice toward none, with charity for all, with firmness in the right as God gives us to see the right, let us strive on to finish the work we are in, to bind up the nation’s wounds, to care for him who shall have borne the battle and for his widow and his orphan, to do all which may achieve and cherish a just and lasting peace among ourselves and with all nations.”

I can think of few things so awe-inspiring.

Jacob Schlabach is an English major from Saint Paul, Minn.