The pranks must end

Goshen College students have a long history of pulling pranks whenever the opportunity arises, but it would seem that there’s one man who just can’t catch a break.

As the authorities for all humor on campus, we received a letter this week from Rustin Nyce, the long-suffering cross country coach:

I am writing to report things that people think are funny but, in fact, are not funny at all. My issue is mostly with the cross country team and their “pranks.” I’m always the object of their shenanigans and it is getting really frustrating. I need your help!

For example, on my 40th birthday, the women’s team broke into my office and put a 50-pound pumpkin on my office chair. It said, “At least you’re not 50.” Who does things like that?

Really, the whole team frequently does things like that. One morning this fall, I woke up to a tent full of hooligans camped out in my front yard. The neighbors were concerned, to say the least. They thought we kicked our children out of the house or had squatters living in our yard. I had to reassure them that it was just college students doing odd things. Then I went into my office and found that people had trespassed again. This time, they hung pictures of my “enemy” all over my office and left balloons everywhere.

I taught elementary school for over ten years before coaching at GC, but I never encountered this type of nitwittery! Given my previously mentioned age, I can’t keep dealing with this level of torment. I think I need to check with President Stoltzfus about hazard pay!

Perhaps Kathy Meyer Reimer can help me with some intervention techniques for juvenile delinquents. At some point, they need to be held accountable for their pranks and tomfoolery.

Thanks for reporting on these events that are really not very funny at all. I hope you can help me find a solution to the issues I’m dealing with. 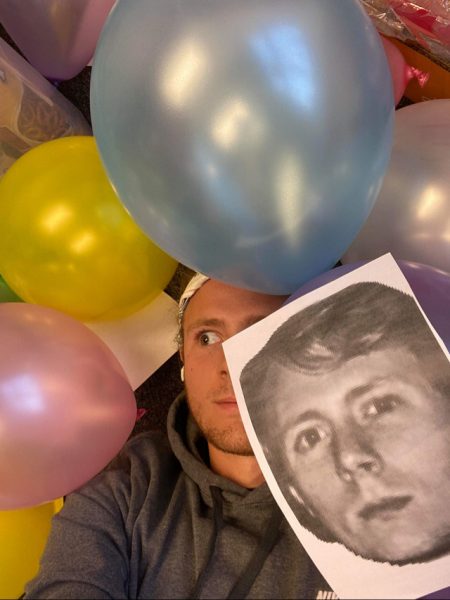 Nyce’s athletes filled his office with balloons and portraits.

As a completely unbiased and totally uninvolved party, I have a few responding comments.

Despite his complaints, Rustin is guilty of some “nitwittery” of his own. Admittedly, his pranks are a bit more subtle, but this isn’t a one-sided dynamic here. I don’t know, maybe he’s just not working the team hard enough at practice if they still have energy to execute such elaborate schemes!

Either way, such pranks are orchestrated out of friendliness, so I don’t know that there’s much you can do about it. As long as the runners are running, the pranks will keep on coming.