I typically try to refrain from doing laundry on the weekends, especially Sunday mornings, because as most GC students know, it can get really busy in the laundry room. One often risks the walk all the way down to the basement (if you live in the Romero Apartments like me) only to discover that there are no washing machines available.

However, last Sunday I felt like my laundry situation was getting pretty dire, so I decided to take a risk anyway and was pleasantly surprised when I found several washing machines free. Naturally, I put my clothes in one of the empty washing machines, added detergent, started the machine, placed my empty laundry basket on top of the machine and went on my merry way. An hour or so later, I returned to the laundry room to switch my clothes over to the dryer. I then returned again several hours later to retrieve my clothes from the dryer and found that (most) of my clothes had been removed from the dryer and placed into my basket (which was now in the middle of the room), and the rest of my clothes had been strewn on the floor of the laundry room near my basket. 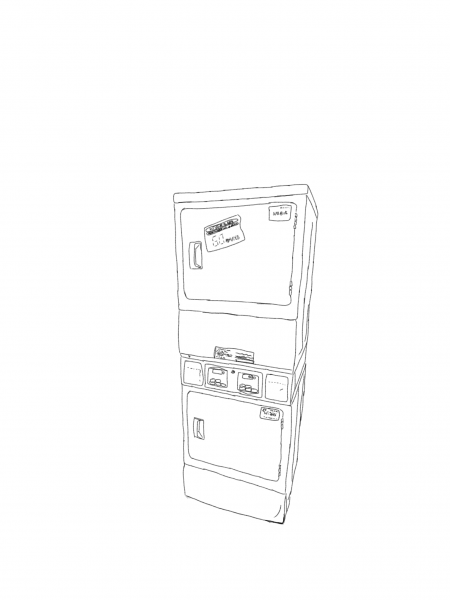 Now, look, I’m not mad at these people (as you can clearly tell by the way I am using my position as the Funnies co-editor to rant about someone moving my laundry half a week ago). No, I’m not mad, but this experience did lead me to wonder: Is there proper laundry room etiquette? In my mind, yes, there is, and it is as follows:

Laundry Etiquette Guideline #1: When removing wet laundry from the washing machine, place the laundry in an open dryer and leave the dryer door open. Do not start dryer.

I know this may be a controversial statement, but I believe it to be ethically sound. It is okay to remove someone’s wet laundry from the washing machine if it is done. As long as you don’t put someone’s wet clothes on top of the washing machine, on the floor or anywhere else besides an open dryer, I think you’re good to go. There aren’t as many washing machines as dryers, so it’s understandable that this happens sometimes. Also, while some would argue that it’s nice to start the dryer for the person whose clothes you moved, as a delicate dryer myself I think this is the wrong move. You don’t know what setting that person likes to dry their clothes on or even if they have something in there that shouldn’t be machine dried.

Laundry Etiquette Guideline #2: Laundry that does not belong to you should only be removed from dryers if there are no empty dryers available. Laundry should never be moved to the floor or be strewn about in a hasty, non-thoughtful manner.

So, a couple of things to unpack here. First, this really shouldn’t happen that often due to the ample amount of dryers compared to washing machines, but I felt like I had to address it because it does happen. Second, I know that part of guideline #2 is up for interpretation, which can be problematic. However, I do think there is a difference between making a neat pile of someone’s clothes on the table in the room and throwing someone’s clothes across the top of the washing machine.

Laundry Etiquette Guideline #3: Do not take up more than one washing machine at one time  on a busy laundry day.

Don’t be that person. We’ve all seen this happen. You walk into the laundry room, and someone is filling three washing machines like a quarter of the way full and leaving you with nothing. Now, I can maybe understand two machines. I get it, you know; maybe it’s been a while since your last load, or maybe you’re cleaning your sheets. Whatever the reason, if you’re doing this, you better be filling that puppy up to the tip-top, okay? Nobody wants to see two half-full machines going when the person could’ve condensed their loads, freeing up space for others. With that being said, if it’s like Friday night and all the machines are open, go for it! This is really only a problem on busy days when a lot of people are trying to use the washing machines.

Now that I’ve laid out the basic etiquette of the laundry room, you might be thinking to yourself: Wouldn’t this all be solved if people just came and moved their laundry when it’s done and not like seven hours later? I mean, yeah, theoretically this would work. Did I leave my laundry in the dryer for the better part of the entire day Sunday? Yes, yes I did. However, I’m trying to be a realist here, and this just isn’t the idyllic world where everyone comes and gets their laundry when it’s done. Though some may dream of this mystical world becoming reality, I believe that if we adhere to the etiquette stated above, the laundry room can be a place of peace, principle and morality.