Wondering what ideas didn’t make the cut this semester? Well, here they are, along with the (very good) reasons why they were not included. The following titles are, for better or worse, exactly how they appear in the “notes” app on our phones.

There is simply too large a range of options to choose from. How could we make a strong case for just one show from the prime Disney era? The correct answer, obviously, is Pair of Kings (before Mitchel Musso got the DUI of course). This is mutually agreed upon by both Leah and Denver, a rare occurrence, so if you disagree, come debate us sometime. While this article didn’t make The Record, it did serve as a source of entertainment for most of a flight to New Orleans, so we clearly have a lot to say about the matter.

Most people know of the alleged haunted happenings that go on in the Art Building, or at least its general creepiness, especially at night. This semester Denver, who was for the most part a non-believer of the Art Building paranormal activity, had a run-in in the ceramic studio late at night with a radio that turned on and off eerily and without rationale. This incident almost prompted a night-long, paranormal stake-out until the whole situation was debunked by one Joel Yoder: apparently it had random alarms set or something. Not sure though, still seems suspect to us.

Basically, one time there was a possum in a tree on campus. We thought we could do something with that. Some weeks are slower than others in the Funnies writing room, people. However, we do acquiesce that this was not one of our more thought-out ideas.

“Moving to the Rail”

Denver thought this was a good idea??? – Leah

Okay, look: This was actually a great idea but was not supported by one Funnies’ editor who will not be named, but whose name rhymes with Shleah Shlauffman. Even though I have a lot to say on this topic, I won’t go into full detail here — ask me in person and I can give you the full rundown. Basically, I’ve reached a substantial milestone in my life where I have moved from the crowds of masses and pits of moshing in the “general admission” area at any concert I attend, to the guard rail (that usually lines the outside of this said area) where I have found peace and contentment, but apparently that isn’t “funny” to some specific people, so for now, this article will live in my heart.

It rained a lot. That was the idea.

Remember Greta Klassen’s investigative work into the identities behind the Black Squirrel Instagram account? The next week, we reached out to the Black Squirrel to see if they had anything to say in response to her call out. They did in fact send us their article in a timely fashion. Unfortunately, some of the things they said in the article were not entirely true, so we were unable to publish the article. Since the Black Squirrel is a satirical news account, this wasn’t entirely a surprise, but apparently we’re not allowed to publish false information in The Record — something about the “integrity of journalism.”

“How to avoid COVID during your spring break travels”

A lot of you all brought COVID back, so clearly our advice would have been helpful. A missed opportunity.

Last week, we promised to publish some responses to other personality dopplegangers on campus… not a single one of you responded to our QR code. So this one is on you, Goshen College student body.

Stay tuned for next issue when we disclose the ideas that didn’t even make this article. Spoiler alert: they suck. 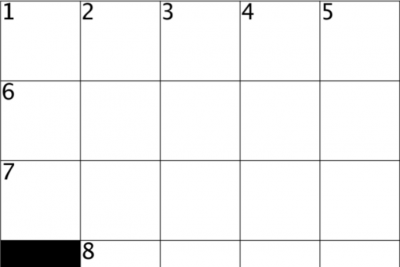