“I wouldn’t say I’m a star, but we know we’re good.” Always humble and team-centered, Minah Kim, a first-year student and Taylor Swift aficionado, emphasizes the unit and not the individual.

Kim has been making impressive strides on the court already in this early intramural season, dishing out passes that would make Pistol Pete blush and displaying a degree of unselfishness that is almost worthy of the team nickname, the Miller Toolbags. Undoubtedly, his superb play has catapulted the Toolbags to a 1-0 record—one of two remaining undefeated teams in the Goshen College B-League Basketball Association, or GCBLBA.

In trying to get him to talk about his own play, the soft-spoken first-year would only mention his team: “We know our strengths and weaknesses…everybody knows their role,” insisted Kim. “We have everything you need for a winning team—a moody kid,  a beastly kid, someone from Kansas, a tall kid, crazy musicians and obviously the short Asian.”

The Miller Toolbags have an assortment of weapons, and Kim is arguably the glue that holds them all together. His steady, calm demeanor and easygoing smile say, “I mean business, but I like to have fun too.” The Toolbags squared off against the Hershey’s Kisses last night in a battle of the unbeatens. It is too late, however, for this publication to tabulate the result.  Despite this, Kim suggested that the following be published anyway: “The Hershey’s Kisses won’t survive. We will destroy them. And tell John Miller to watch out for our dunks.”

Author’s note—(This is a real story about real people with real quotes. It’s all real.) 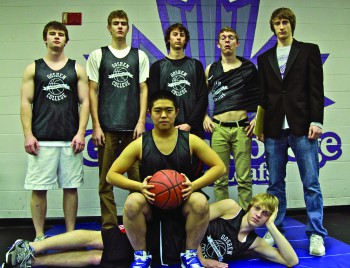