The line-up was publicly announced last night, March 30, at the final concert of the 2009-10 season, which featured the African Children’s Choir. Initial reservations were available immediately following the concert, and season tickets formally go on sale to the public at 9 a.m. on Wednesday, March 31, at the college’s Welcome Center. 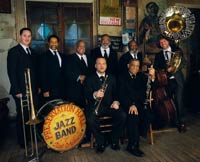 In its 50th year of entertaining and educating audiences around the world, Preservation Hall Jazz Band will perform its exciting sounds in Sauder Concert Hall. With a mission of perpetuating the New Orleans Jazz art form, the 2005 devastation of the city by Hurricane Katrina has made the band’s efforts ever more significant. The Tucson Weekly writes “New Orleans’ Preservation Hall Jazz Band keeps the joyousness alive.”

The vocal ensemble Conspirare has garnered rave reviews, Grammy nominations and national recognition for its artistry, virtuosity and expressive singing. Based in Austin, Texas, this group of professional singers from around the country is led by renowned conductor Craig Hella Johnson. Conspirare combines the classics with contemporary works, providing audiences with innovative sound, colorful images and thought-provoking literature. 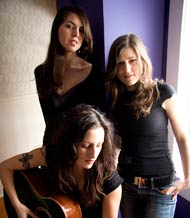 The Wailin’ Jennys are three extraordinary voices with harmonies that delight and captivate their audience. The Jennys’ acoustic accompaniments and songs produced by two founding singer- songwriters keep the music fresh, while maintaining an undercurrent of traditional folk themes and images. They are Juno award winners – the Canadian equivalent of a Grammy – for their album “40 Days.” 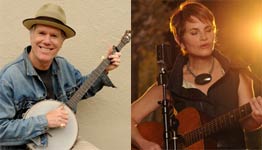 Shawn Colvin stands out among female singer-songwriters of today with 10 albums and three Grammy Awards. Known for her unmistakable vocals and matchless guitar stylings, Colvin offers contemporary folk music that is honest and warm-hearted. Actor, singer and songwriter Loudon Wainwright III has a performing and recording career spanning five decades and 23 albums. Wainwright was a 2010 Grammy winner in the traditional folk category for his album “High Wide & Handsome.” 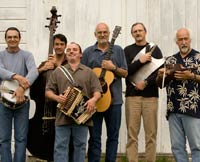 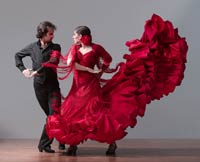 Flamenco Vivo Carlota Santana dazzles audiences with “a blur (rapido!) of fancy footwork” according to The New York Times, performing the intricate and intense rhythmic styles of this traditional Spanish dance. Artistic Director Santana and her company incorporate music, dance and colorful costume to make this one of the richest and most exciting expressions of folklore anywhere. 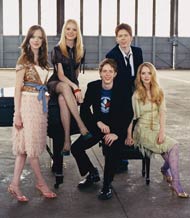 “One family, five pianos and 50 fingers add up to the biggest classical music sensation in years,” the New York Post wrote of The 5 Browns. With their five Steinway grands in tow, this youthful quintet of brothers and sisters spectacularly delivers on their dream of “waking up classical music” for their audiences of all ages. 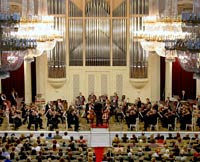 The internationally-acclaimed St. Petersburg Philharmonic Orchestra has played in the most prestigious concert halls of the world. This year’s Sauder Concert Hall appearance provides access to this rich, vibrant sound experience of Russia’s oldest symphony orchestra for Goshen enthusiasts. The Washington Post writes that St. Petersburg “surpassed all expectations” and transported the music “straight from each score’s soul and into the hearts of listeners.”

This year’s regular series season ticket includes six concerts. Four performances are set for each season ticket: Preservation Hall Jazz Band, Wailin’ Jennys, Flamenco Vivo Carlota Santa and St. Petersburg Philharmonic. Those buying the basic season ticket package then can choose the additional two performances, one each from these two pairs of contrasting shows: Conspirare / Shawn Colvin and Loudon Wainwright III; BeauSoleil avec Michael Doucet / The 5 Browns. The six-show ticket packages are again discounted around 15 percent over individually priced tickets: a $250 value at $210 for A section seats (main floor, front sides, front of balcony), a $215 value at $180 for B section seats (main floor back, back sides, raised back and back of balcony) and $135 value at $115 for seats in the C section seats (upper side balconies). Anyone can also create a seven or eight-show package that includes either or both of the remaining shows at an additional cost.

Season tickets go on sale to the public on Wednesday, March 31 at 9 a.m. A nonrefundable deposit of $20 per seat will hold season tickets and seat preference. Full payment is due July 15. Seats will be assigned according to the date received. Individual tickets will go on sale Monday, Aug. 30 at the Welcome Center. This year’s series packages reflect a 15 percent discount over individually priced tickets.

For information about ticket availability, prices, reservations or more information, contact the Welcome Center at (574) 535-7566, e-mail welcomecenter@goshen.edu, or visit www.goshen.edu/events/performingarts.

Seating for those with disabilities is available and the minimum age of attendees is 5 years old. And tickets are nonrefundable.

The Goshen College Performing Arts Series debuted on Sept. 21, 1997. Since then, the college has hosted more than 90 concerts by some of the world’s greatest performers as part of the program.