The Roommate Game with Smucker and Cranston 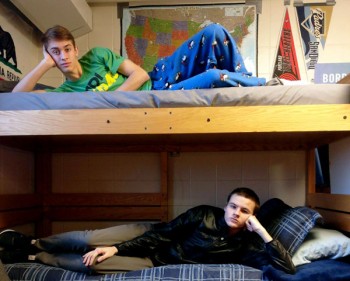 CAC is in the business of uncovering the campus’s biggest secrets. And let’s be honest. Everybody thinks that they are the best roommate pair in Goshen College. But can you really expect to call yourselves the best roommates at Goshen if you can’t even name your roommate’s grandma’s name? Nobody knows that to be true better than roommate game winners Matthew Smucker and Steven Cranston. We interviewed them to get an inside scoop on just how perfect they are.

CAC: What are your majors and your year?

CAC: What is your room’s number? How long you have been rooming together?

K408: We’ve been rooming together since two weeks before the end of last semester, beginning of December.

CAC: Did you guys know each other before college? When was your first date?

Matthew: We had no idea our other half existed until this year at college. Our “first date” was when I had nothing to do on the second night of college and decided to go check out that popcorn smell coming from across the hall in Steven’s room. We ended up staying up late talking about sports even though I only know soccer. Steven’s really good at one sided conversation.

CAC: Are you going to be rooming together next year? When are you getting married?

Matthew: Steven thinks that he’ll be an RA next year for some reason, so it’s still up in the air. Maybe if I push him enough, he will get a triple with me. Deep down, he knows he needs me. Sadly, Steven has his sights set on an “extraordinary young woman” (his words) living in a different state, so I don’t expect there to be any wedding between the two of us, sorry to disappoint.

CAC: How did you become close? What made you good friends not just roommates?

Matthew: I agree. Not quite sure how it happened, but we ended up spending a lot of time together because of sharing some classes, and here we are now. What really helped was being good friends before becoming roommates. I think I just wanted some excitement in my life and Steven is completely unpredictable, so I got what I wanted.

CAC: Best thing about living with each other?

Matthew: It’s never boring, and he brought a piano into our room.

CAC: Worst thing about living with each other?

Steven: We argue about almost everything, there are just so many things.

Matthew: Okay, specifically though, what annoys you about me?

Matthew: Steven spends a lot of time in bed and for some reason it really annoys me. Also I feel like he decides to play piano because I’m studying sometimes. Then there’s the fact that he doesn’t do much work ever so I end up having to do all of this…

CAC: Favorite activity you do in the room?

Both: Mario Kart on the Nintendo 64. We can beat anyone.

CAC: Did you practice before the roommate championship?

Matthew: Of course we did. We are extremely competitive. I actually still remember Steven’s grandma’s name… Nancy. Easy.

Matthew: It’s a 4 right now but usually a 2. Surprisingly, Steven is normally the one to clean the room but I think it’s just because he wants to put off doing homework as much as possible.

CAC:  Are you early birds or night owls?

Matthew: Okay, really, Steven is in his bed until 5 minutes before his first class, while I’ve already showered and eaten breakfast. Pretty much opposites.

CAC: What is your secret?

Steven: In kindergarten I wet my pants. . . I don’t get the question? We tolerate each other.

Matthew: Figure out where the other person’s buttons are and push them as long as possible until they blow up. Then you know how far you can go without the consequence of them throwing a hymnal at you. Really. True story. He threw a hymnal at me once when he was playing piano and I started singing louder and more obnoxiously after he told me to stop.