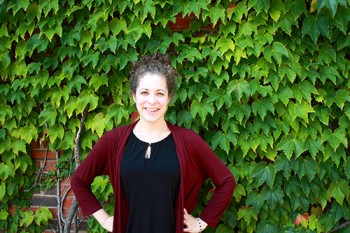 Anna Kurtz Kuk, the new assistant professor of theater, is a self-proclaimed “one trick pony.”

“Theater is my thing!” Kurtz Kuk claims. A good thing too, considering there will be no slow, dipping-her-toes-in-the-water of Goshen College. Rather, Kurtz Kuk is diving head first into the deep end. She is not only teaching full time, but also directing the annual Peace Play and this year’s Main Stage.

Kurtz Kuk is from a small, Midwest town called Sterling, Ill. She graduated from Creighton University with a BA in theater performance and received her MA from Virginia Commonwealth University in theater pedagogy. Since graduating, she has worked with communities, colleges and a range of students taking the stage across the Midwest in Sauk, Ill., South Bend, Ind. and Kalamazoo, Mich.

Her proudest moment she says, is when she started a community outdoor Shakespeare program. People ranging from 15 to 80 years old were recreating Shakespeare classics together on the same stage. Community members would bring their lawn chairs and picnic baskets and enjoy fine art fitted to their town.

Happening upon the job opening in the Theater Department at Goshen College took her by surprise. “I was saying, ‘Any job!’ but when I wrote the cover letter [applying here], it really connected. It’s the place. It checks a lot of boxes for me.”

Kurtz Kuk said that coming from a Catholic background, Goshen College’s values really stood out to her. She says she has seen a lot of colleges talk-the-talk, but few follow through and incorporate the kind of values into its programs like Goshen does. Goshen College’s values “touch every student in every class,” says Kurtz Kuk. She loves the commitment to Christ-Centeredness (“I don’t mean to be  ‘cheesy’” she caveats), sustainability and the passionate learning. Kurtz Kuk says she can really feel the passion and is looking forward to being a part of a strong community again. “The community — collaboration between so many experiences… and the singing! Parables gave me chills.”

Kurtz Kuk says the collaboration, the values and the community are also a little overwhelming. “There is a ton to do” she says. Besides teaching and directing, Kurtz Kuk is looking forward to building connections with students and engaging the broader Goshen community. The amazing thing about theater, Kurtz Kuk explained, is that it’s a conversation, an invitation, to the community to participate in what the theater students have been working on.

The two plays Kurtz Kuk will be directing are the annual one-act Peace Play and the Main Stage. The one-act is called “Party Favors” by Kart Peppers, and the Main Stage is “Kinder Transport,” a play that takes place during World War II and outlines the journey of German Jewish children as they take refuge across the western world.

Keep an eye out for these exciting plays and opportunities lead by Anna Kurtz Kuk, the new assistant professor of theater, full of energy and raring to take part in the Goshen College community!