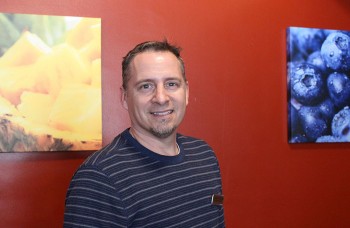 Jeremy Corson has served Goshen College as the head chef since 2009, even coming to accept the ‘Rott’ moniker, especially if it means ‘Really Outstanding Tasty Treats’
Photo by Courtney Wengerd

We all know him: Jeremy Corson, the man in charge at our neighborhood Westlawn Dining Hall, or perhaps better known to most as “The Rott.” Occasionally he is the friendly face who greets you and takes your ID as you enter Westlawn, or maybe the person captaining the most high-tech golf cart you’ve seen on campus. In any case, many are not familiar with just who Jeremy is.

Corson’s interest in becoming a chef was first peaked as a junior in high school, 1986 to be exact.

“At that time I knew I liked to eat and enjoyed being in the kitchen growing up with my grandma and mom,” he said. “I had a job at a local restaurant and found the environment interesting enough to pursue food service.”

From high school, Corson went on to graduate from Johnson and Wales, a culinary school out of Rhode Island. Johnson and Wales is a globally-recognized center for culinary education and a member of the Culinary Hall of Fame.

After graduating from culinary school, Corson grew through the ranks of AVI, the food service company associated with Westlawn Dining Hall and the Leaf Raker. In 2008, Corson began working as the chef and general manager for ITT Aerospace in Fort Wayne. The following year, he learned of AVI’s education division. Through an eventual promotion and transfer process, Corson found himself as Goshen’s head chef in June of 2009.

Goshen has seen a multitude of changes in the dining hall while under Corson’s leadership, including fresher food, rotational cycle menus, vegetarian/vegan options at every meal and a floor plan remodel. The new floor plan offers better flow, as well as the ability to produce the meals in front of patrons in the main entrée area.

“We enjoy catering and providing memorable meals to all departments,” Corson said.

As a whole, Corson very much enjoys his position as chef at Westlawn. He takes great pride in Westlawn as “a great place to meet, eat and enjoy time away from class.”

Corson is also always excited for future changes to come to Westlawn. He continually bases alterations to the menu on the comments the dining hall receives, as they strive to serve the best food.

Corson was also present at Goshen during the conception of the famous “Rott” nickname. As the head chef, Corson has some reticence towards the name.

“I used to work for Marriott and I get the nickname,” Corson said. “Soon after AVI was awarded the opportunity to serve at Goshen, a re-naming campaign was started by the student movement of the day and the “Rave” was chosen as the new name—it didn’t stick.”

Corson has worked hard throughout his career to bring good food to people, and his dedication to continually improving the college’s food offerings are testament to that. Although the nickname the ‘Rott’ does not necessarily speak to that, there may be a way of thinking that preserves this piece of colloquial history.

“From a marketing standpoint the current nickname isn’t very appealing and representative to the cuisine served—it’s Goshen College nostalgia, though, and that’s important,” Corson said. “One acronym floating around this year, dubbed by a current student, Bekah Schrag, is ‘Really Outstanding Tasty Treats’: [that] is how I like to think of the nickname.”