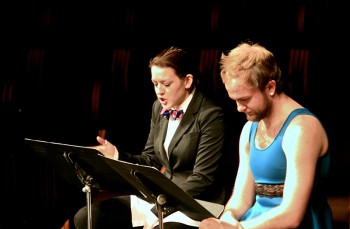 This Friday, GC Players held their third Miscast Cabaret, in which the participants performed a song or a scene intended for a gender other than their own.

Audience members were also invited to dress up. The show began with a public service announcement from GC Players and emcees for the event Lea Ramer, a junior, and Martin Flowers, a senior, who said that the point of a Miscast Cabaret is not to mock those who are transgender, but to have fun and embrace a character for the audience to see.

GC Players is a club that began about three years ago. Miscast Cabaret was one of the first events they organized, and that first performance was both popular and well-received. The event was brought back the following year and once again this year. “We’re trying to make Miscast a regular thing,” said Flowers.

Christina Hofer and Paul Zehr, both seniors, started off the night with the song “A Stud and a Babe” from the musical “I Love You, You’re Perfect, Now Change.”

They were then followed by Diona Beck, a sophomore, lip-syncing to the Weeknd’s “Can’t Feel My Face” while dressed as the Weeknd.

Elizabeth Franks-North, a senior, followed Beck with a monologue from the movie “Manhattan.”

After this, Wade Troyer and Galed Krisjayanta, both juniors, performed Adele’s “Make You Feel My Love.”

Ramer and Flowers then took the stage, performing a dramatic reading of a scene from a one act play while Paul Zehr read the stage directions.

AJ Delgadillo, a sophomore, and Ali Medellin, a junior, performed the song “Another Day” from Rent.

The evening ended with Naomi Peters, Lukas Thompson and Zach Ganger, first-years, and Ben Ganger, a senior, performing “The Schuyler Sisters” from the musical “Hamilton.”

Miscast Cabaret was relaxed and there  was  no  need for perfection.

Ben Ganger said, “Often in performance [actors] feel this incredible need to be polished and perfect. With Miscast it’s more about having fun and sharing a performance with friends, which is refreshing because so many of us are performing a lot.”

Ramer, who gathered acts for the event, said that she loved having no idea what people would really bring until that opening night in a dress rehearsal.

“When people say what they are going to do, I only get to see it the night of the performance,” said Ramer. “That’s really cool. There’s a good amount of variety in Miscast. You have this emphasis on a relaxed night but even then there’s a lot of talent.”

Flowers said, “One moment that happened in a lot of scenes was that you forgot [the performers are] performing as another gender. You just get drawn into that performance as it becomes something wonderful.”

A final invitation from the members of GC Players was to get involved. “Do it next year,” said Flowers. “It’s a cool thing to perform as a gender you aren’t. The moment when you find that natural humanism outside of gender is amazing.”