Notes from the Underpass 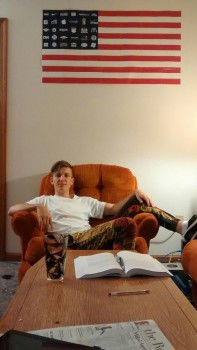 Kiernan under the shrine of his newly acquired second master.
Photo contributed by Kiernan Wright

If this shows up in the Funnies section, please realize that the Record is trying to discredit the seriousness of this piece. This is not a joke, but rather a white man trying to get back in touch with his conservative roots.

Let me explain that last sentence. From the first grade until I graduated high school, I attended Central Christian in Wayne County, Ohio.

It’s hardcore Amish country; similar to Lancaster, but without the Mafia. While many adults in the community are graduates of Goshen, GC has a less-than favorable reputation. Often referred to as Gay-shen, I heard tell of good Mennonite boys and girls coming back morally corrupted by communist ideology.

The last straw came when my friend presented to our senior English class on why global warming was a hoax. I decided that being corrupted might not be so bad after all. I packed my bags for Goshen, and began honing my compulsive masculinity.

After entering the fiery furnace which is Goshen College, I was surprised to find that I was not surrounded by a lake of fire. Yoder 2 was a great floor to live on, and it often smelled like someone was rolling communist pamphlets in their room.

Needless to say, I had a grand time doubting the legitimacy of our social order, realizing that I was kind of a privileged jerk, and finally being around people who shared similar political views as myself.

This leads me to my senior year, where by now I am quite comfortable in my liberal utopia. Meanwhile, my conservative brothers and sisters are burnt at the stake daily for their beliefs.

That last sentence might have crossed a line, but hopefully I can bribe the Record editors to keep this unedited. The looted possessions of conservative students will fill their coffers. Wow, this is getting out of hand.

Anyway, as a secondary SST, I decided to be conservative for a week so that I might fully empathize with students who hold different beliefs than my own. The first hurdle to my quest was obviously that I live with Ammon Allen-Doucot, who is a raging liberal if I ever saw one.

I could not bring myself to confront him about our temporary differences, so instead I took to Yik Yak to attack the “liberal agenda” as I like to call it. My plan got a bit out of hand, however, when Ammon broke down crying in my arms because of some “ignorant white man” on Yik Yak. How did he know?

On the second day of being conservative, things got really out of control when I accused Steve Nolt of resigning from Goshen to take a professorship position with a religious extremist group. Of course, Steve kindly shut me down with an intriguing lecture on the incompatibility of Mennonite values to religious extremism. Has he never heard of the Amish Mafia?

My experiment had failed, and I have now written a Funnies article which will probably be heavily edited for good reason. Thanks, Obama.

But enough; I don’t want to write more from “The Underpass.” [The notes of this paradoxalist do not end here, however. He could not refrain from going on with them, but it seems to us that we may stop here.]