Becoming ‘the next Pat Hughes’ 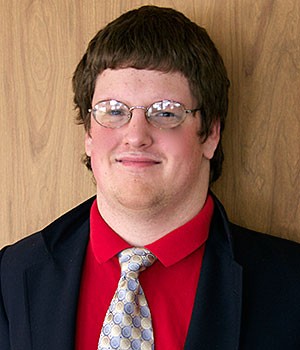 Tony Miller—my brother—was born to Lyle and Bonnie Miller on May 2, 1993. Now 22 years old, he spent the first month of his life in Memorial Hospital of South Bend. It was determined within a year of his birth that he had cerebral palsy, a condition that, in his case, affects fine motor skills and his ability to walk.

While Tony was in the hospital, our parents would spend as much time with him as they possibly could. Due mostly to jobs, they were not able to spend every minute of every day with him, so they recorded cassette tapes of their voices.

“We would read him stories,” our father, Lyle, told me. “But there are only so many stories we can read.” Lyle would often read out of the media guide from his favorite Major League Baseball team, the Minnesota Twins. “This was not an attempt to get him to like the Twins,” he said. “This was just a way to get him to hear our voices.”

When Tony came home, he spent many evenings home with our father, while our mother was at work. Lyle would spend time talking to him about sports, watching Jeopardy and reading stories. These activities exposed Tony to a world of words.

Tony recognized at a young age that he would never be able to participate in sports in the same way that most kids would. His physical limitations meant that mobility was often a struggle for him.

However, Miller also realized that varsity baseball was not the only way to participate in sports. “Most boys growing up dream of playing baseball professionally,” said Tony. “I, however, wanted to be the next Pat Hughes. I remember the first baseball game I watched on television. I was in the dining room at home watching game seven of the 1997 World Series and realizing that people get paid to talk about baseball. I knew that was what I wanted to do.”

At age four, Tony set his mind to that dream.

Throughout his childhood Tony was involved in sports in many settings. He would attend as many sporting events as possible and write game notes of plays. He would keep a scorebook of my Little League baseball games, and began operating the scoreboard for middle school basketball during his fifth grade year at Chandler Elementary.

Tony continued his love of sports through high school. He operated the scoreboard for as many sports as he could during high school, which resulted in nine varsity letters.

“I had the third most varsity letters in my graduating class—nine.” Miller said, “Without ever setting foot on the playing surface during competition.”

His senior year at Bethany Christian High School, Miller did his senior job shadowing with Josh Gleason, the current athletic director at Goshen College and the previous sports information director.

Gleason recognized Tony’s potential. “Tony had a way of picking up on ways of keeping stats that was remarkably fast,” Gleason said. “That was something I remembered when he gave his application for sports information director when the position opened up a little over a year ago.”

In September, Tony became the sports information director at Goshen College. “He has a memory for all sorts of details,” said Gleason. “He also has been in Goshen his whole life. He knows this program in a way that most 20-year-olds would not. His brain is detail-oriented and thorough. In addition, he has top-notch writing skills and a memory for stats that is one of the best I have seen.”

For example, Tony claims that his favorite form of citation is Chicago style, “because the citation manual is massive,” he said, holding his hands 16 inches apart.

When you step foot into Tony’s office, it appears as if he never leaves. The desk, often strewn with papers, computers, cameras and wrappers from snacks, is a visual of time and energy Miller has spent in his profession. “My shelves and drawers are organized,” said Tony, smiling. “My folders are organized by sport and are in chronological order.”

“It’s weird to think that Dad almost had to force me to apply for this job,” Tony said, remembering the process. “But if I got the chance to have a job of this nature for a long time, I would continue to take it.”

Tony realizes that his job also comes with struggles, especially for somebody who has somewhat limited mobility due to his cerebral palsy.

“It has almost been a blessing,” Tony said about his mobility. He claims that it has caused him to be more efficient in what he takes with him to sports events. It has also caused him to be more observant in watching sports. Due to that, he has been more proficient in keeping statistics. “Everything I take has a purpose,” said Tony.

He talked for more than an hour. As is the nature of his job, he was able to keep track of many things at once. During the conversation he had two open computers on his desk as well, both of which open to social media as well as a phone that would buzz every five minutes. During our conversation, he listed more than 20 facts about sports at all levels, demonstrating how much there was that was kept in his mind; surprisingly, it was not overflowing out of his ears.

While Tony considers himself to be an introvert, he will not shy away from giving statistics to anybody he meets. “If Tony gets to know you,” said Jason Samuel, Tony’s former boss at 91.1 The Globe. “He will talk forever.”

“Fall is my busy time,” said Tony. “I have the most sports to cover this season compared to winter and spring.”

Tony can often be found in his office when he is not at a game or at home.