A day in the life of an Al Roker groupie 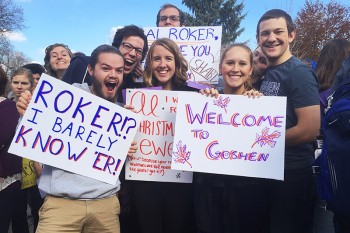 7:00 a.m.: Wake up. Go to Concord Middle School. Tell the students that I get to see Al Roker today. They don’t know who that is and tell me I’m old. I take it as a compliment.

11:00 a.m.: Eat tacos for lunch with a bunch of Debbie Downers who don’t even know who Al is. Receive a call that causes me to loudly exclaim a naughty word while in the presence of approximately 1,700 CCYC kids. Surprisingly, the call has nothing to do with Al Roker. Apologize profusely. Receive blank stares from children.

11:50 a.m.: Go out to the Adelphian fountain, which has suddenly magically been refilled even though it was just drained like two days ago. Almost poop myself in excitement (or because I had tacos for lunch), much like Al Roker did at the White House in 2002. #twinz

12:15 p.m.: Practice the painfully tacky Al-ma mater. Decide the paper with the lyrics would be better used to give my phone number to Al. Write my number down, fold it up really small, and practice doing that sly thing where you shake someone’s hand and secretly transfer a note to them.

1:15 p.m.: Bike over to the fountain again only to find that Al still hasn’t left Arkansas. Lose faith in humanity.

1:20 p.m.: Come up with the hashtag #SlowPokerthon and restore my faith in humanity because I’m so hilarious.

2:10 p.m.: Head back to the fountain, wondering how many calories I’ve burned while walking back and forth for Al. Probably at least two.

2:15 p.m.: Throw a fit about the recent erecting of barriers around the fountain, then ignore their presence entirely.

2:24 p.m.: Get summoned to the other side of the fountain by some elderly people who don’t understand the sign I’m holding (“Roker!? I barely know ‘er!”). Do my best to explain it. They still don’t understand it, but are sympathetic and tell me it must be a generational thing.

2:30 p.m.: Start to question whether or not Al is actually coming and consider writing the funnies article about the Starbucks red cup fiasco instead. Feel a deep disappointment that both Al and Jesus are absent this holiday season.

2:30:05 p.m.: Remember that Avery Martin said this was my “time to shine” and decide that I can’t let her down. The article must go on!

3:05 p.m.: Try to lead a camp song. Nearly die of embarrassment but decide that it’s okay because it’s good material for a funnies article and at least I wasn’t being super alienating to the rest of the crowd by singing only hymns.

3:10 p.m.: Kulp saves the day by playing secular, inclusive music. Everyone within seven inches of them can hear it and is appreciative.

3:18 p.m.: Al Roker finally arrives. I shake his hand, but forget to slip him my number. He gives the weather report. The whole event is anticlimactic and Al is a much smaller man than I was expecting. The camera really does add ten pounds (and at least two feet). Wonder how tall Matt Lauer really is.

3:21 p.m.: Give up my groupie ways and go back to being nothing more than a lowly funnies editor.