The day I was tied: A tragic memoir 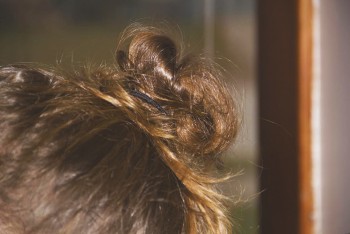 A photo of our hero. Stay strong in the struggle!
Photo contributed by Andrew Pauls.

I had just gotten out of the shower. I dried off and stretched. Then something odd happened…I felt myself being gathered up and became aware of a constricting sensation. I couldn’t breathe. I felt bunched up, tied down; I was folded over upon myself. I didn’t know what was happening to me, and then the horrible realization came upon me:

I was becoming a man bun.

I had never thought it would happen to me, I was so naïve. I thought I would spend the rest of my life dancing with the breeze, basking in the warmth of the sun, free to wander where I chose upon Bob’s head. I had always thought I would remain neatly clipped until I would gradually grow gray and age gracefully into that distinguished horseshoe shape that comes with male-pattern baldness.

I had vowed never to grace the skull of someone who paid thirty dollars for a pound of coffee, or brewed their own beer. I promised myself I would never adorn the head of someone who uses a Polaroid or whose wardrobe consists entirely of tight, short-sleeved, plaid button downs and jeans tighter than Chris Christie in a Smart Car.

But alas, it was my fate.

I should have seen it coming when I found myself enfolded in the smothering embrace of a beanie in August, or when I was crammed into a bike helmet and Bob mounted a “fixie.”*

I should have seen it coming when Bob began attending concerts of bands with names like “Wombat Carnival Collective” and “Hippo Campus,” or when I found myself enveloped in weed and cigarette smoke at esoteric art galleries and poetry slams.

I should have seen it coming…

I long for the simpler days of my youth, when I did not feel constrained by hair ties or the pressure to do things before they are cool. I long to be let loose in the breeze, but this rubber band has become my prison. In solitude I sigh, praying that I may receive a louse or two, that my wearer would be compelled to liberate me from my stretchy prison. It is only at night that I get reprieve, when I drape myself across a pillow dreaming of the days when I was light and free…

*A hipster kind of bike that operates in a similar fashion to a tricycle in that the pedals always spin with the back wheel.