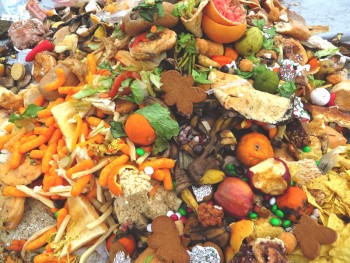 Naomi Gross and Cecilia Lapp Stoltzfus explore the issue of the amount of food waste in the United States.
Photo contributed by Ryan Sensenig.

While you may occasionally feel a twinge of guilt at that half-eaten burger you toss into the compost, food waste is a much bigger issue than we have been led to believe.

In the past 100 years American culture has transitioned into a fragmented system where connections to land and place have become irrelevant. This is tied to our consumer culture which allows some groups to live in wasteful abundance while others bear the brunt of this lifestyle.

In fact, global agriculture produces enough food for 10 billion people. However, 11 percent of the world’s 7.3 billion people are chronically undernourished and in the US 14 percent of households live with food insecurity. Many of us here at Goshen see numerous examples of food waste in our daily lives, and we can try to limit personal food waste, but much of the wastefulness happens before the food even reaches our plates.

Here is the story of how we got into this predicament:

Whereas farming used to mean diverse, local, family farms, the past century has seen a shift into an industrial agriculture model based on monocropping. As farms are becoming larger and larger, crop diversity is plummeting and corporate globalization is causing agriculture around the world to become increasingly uniform and placeless. Losing connection to the surrounding environmental and cultural conditions in order to grow 1 or 2 crops is risky.

And this is where the US government has stepped in. The US Department of Agriculture subsidizes agribusiness and encourages maximum production of a few commodities (field corn, soybeans and wheat) by reducing the potential financial risks of overproduction or crop failures. Because of this, Western farmers have become more in tune with national and global markets than with the nutritional needs of their communities or the ecological constraints of their place.

In developing countries, many small farmers are forced off their land to allow large monocultural plantations to be established. In short, our agricultural system is not set up to satisfy hunger. Instead, we produce much more of certain crops than humanity needs, yet leave many people without access.

In addition, lots of food in the US is thrown out simply because it does not “look right” or expires on grocery store shelves. Thus, the problems involve both misguided production and inequitable distribution.

To move from the big-picture context to our personal lives, we must know where our food comes from and where it goes. If we don’t, this large scale industrial model leaves us more susceptible to climate change and political and corporate manipulation. In order to rectify these injustices, we must re-value place-based agriculture and connect to local food justice initiatives.

Here are a few ideas: Transition Goshen and Prairie Wolf Collective in Elkhart are two local groups that are working to improve food access by bringing unity to our fragmented food system. One strategy is community gardening, which helps to insure that local food gets eaten locally and gives us a concrete way of connecting ourselves to the land and our communities. Trackside community garden (North of Goshen College on 9th street) and the small garden by AVI are good opportunities to connect by growing food.

Getting to know local farmers can be another way of connecting with our food and the growing process. The Goshen Farmers Market (Tuesdays and Saturdays), Merry Lea (produce stand Friday afternoons by the science building), Kercher’s Orchard, and Clay Bottom Farm all invite relationship-building between Goshen residents and local farmers.

When we do find ourselves with excess food, donating to The Window helps with food insecurity crises and composting returns nutrients to the soil. By exploring these actions, we exchange nourishment with the land and people around us. This will ensure a stronger connection to natural cycles and the formation of more resilient local communities that care about the earth and all its inhabitants.

When we really connect to the growing of our food, we can’t help but waste less. If you want to explore these issues more, do the Merry Lea Sustainability Leadership Semester and check out Wendell Berry, Frances Moore-Lappé, Vandana Shiva, and John Oliver.