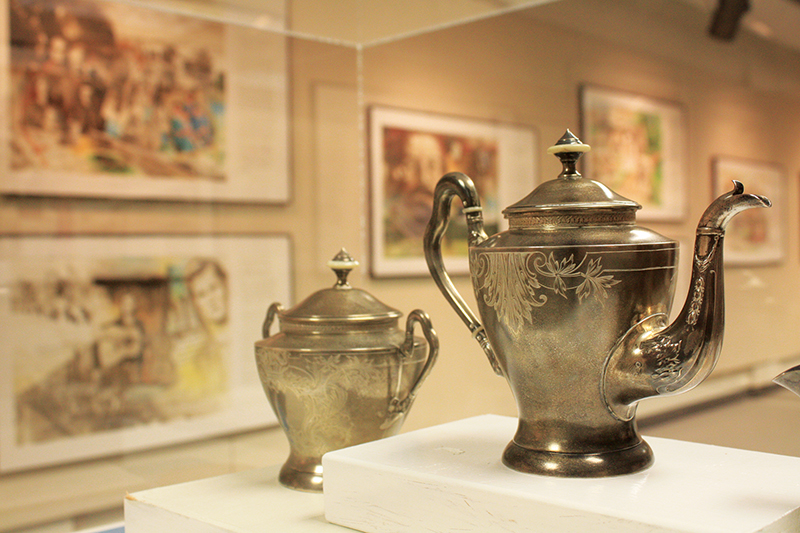 The “Along the Road to Freedom: Mennonite Women of Courage and Faith” exhibit is on display in the Good Library gallery until Oct. 16.
Photo by Dona Park.

The following selection is one of the many stories showcased in the Good Library exhibit entitled “Along the Road to Freedom: Mennonite Women of Courage and Faith.

“Anna grew up on her parent’s large estate. Her mother, who came from Alsace, France, provided her with a good education and a grounding in the Christian faith. In 1901, Anna married Abram Bergmann and settled on an estate called Woronaya. Anna gave birth to ten children. Four died at a young age. The estate thrived. When the revolution came they lost everything and were forced to flee. In 1921, Abram, his father, and all male family members over eighteen years were killed, leaving Anna a widow with six children. They barely survived The Great Famine in 1922. Anna managed to leave Russia in 1924. The journey included ten days on a freight train before leaving the old country behind. Eventually she settled on a farm in Glenlea, Manitoba. The struggle to survive was intense. Still she became a tower of strength not only for her children and her church family but for many others whose lives she touched. She was greatly loved. Anna lived a life of love, forgiveness, and inspiring faith that the Lord God is the Father of the widow and orphans”

This exhibit, which is now featured in the Good Library’s gallery until October 16, tells of the trials and triumphs of Mennonite women during the Mennonite exodus from South Russia and Ukraine to Canada due to the war, political turmoil, famine, and the onset of WWII.

Curated by Anna Wiebe, this exhibit is on loan from the Mennonite Heritage Centre in Winnipeg, Canada and was featured at the Mennonite World Conference in Harrisburg, PA. Ervin Beck, a retired Goshen College professor, is the head researcher for the project and collected the personal experiences, artifacts, photos, documents, sentimental objects and scripture from the families of the women. Ray Dirks, curator for the Mennonite Heritage Centre Gallery, then transformed these stories and artifacts into multi-media collages, giving color and shape to their already amazing journeys. The art connects the audience to the emotional stories and history behind a rather unrecognized piece of Mennonite history.

And it is inspiring. Though men are often credited for the pain and suffering of war, these strong women also experienced these struggles as they gave all of themselves to keep their family together and hope alive during times of unimaginable struggle. It took all the persistence, courage, love, and faith that they could muster in the chaos of war to take care of their family, many times without their husbands. Probably the most remarkable part is that through starvation, torture, murder, death, forced labor and arrests these women remained humble, forgiving, graceful, kind, loving and faithful, not seeking revenge upon their prosecutors. They remained, like Anna Bergmann a “tower of strength”, forgiving even when it seemed impossible.

A smaller part of the exhibit details the involvement of Mennonite Central Committee (MCC) in the health and wellbeing of refugees from around the world, like the Ukrainian women in this exhibit. Through the 1920’s, North American Mennonites worked through MCC to deliver aid to Mennonites still in Russia and Ukraine, and resettle those who had immigrated to Canada and the United States. MCC has since extended its outreach all over the world, but is still active in refugee assistance.

Come celebrate the strength of women and an important piece of Mennonite heritage in Along the Road to Freedom: Mennonite Women of Courage and Faith.