How do I envision Goshen College in the future? 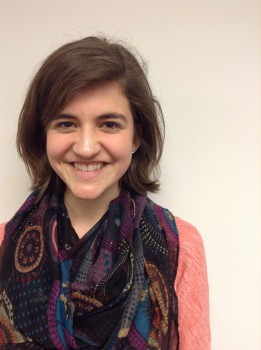 When people ask me how I’ve grown in college or what the highlights of my time at Goshen have been, I have plenty to say. In my job as an admissions ambassador it’s usually not difficult to answer prospective students’ questions about why I chose to attend Goshen College. But looking back over the past four years there’s much more to my time at GC than talking points summing up my experience. Reflecting back has led me to dig a little deeper and think about why, how and in what ways I have been shaped by this college. I keep coming back to the idea of identity: during college, I have had an opportunity unlike any other to discover and grow in my identity. But maybe more importantly, I have been taught—sometimes gently and gradually, sometimes in ways that pushed me—to be aware of how my identity fits in with other identities around me.

Talking about identity really means talking about privilege and oppression. Even these words were not in my vocabulary until I became a student at Goshen College. They’re buzzwords that run the risk of instantly turning some people off. But one of the first things I read about Goshen College was the rhetorical question, “Can a small liberal arts college in the Midwest change the world?” The striking thing is, I see Goshen College students actually answering that question by becoming aware of themselves and their place in the world. It has been both nurturing and challenging for me to be part of a community where people are working for education and activism about the environment, sexual violence, GLBTQ identity and racism, to name a few. Here is something that hit home for me:

I grew up Mennonite, but as one of the only ones in my large public high school. So coming to Goshen, I was thrilled to find a community of people that knew the hymns I grew up with, talked about common friends and relatives, cooked foods my grandma had made, and shared many of my values. But it didn’t take long for me to become aware that the Mennonite heritage I cherish also comes with some baggage, often resulting in exclusion and hurt towards those who feel like outsiders. It has been one of the most crucial points of growth for me in college figuring out how to confront this exclusion and work to get rid of it. It’s a deep-rooted, complicated issue, but one that’s essential for our campus.

A turning point for me was taking Anabaptist-Mennonite History last semester. In this class we re-visited some of the historical and theological roots of the Mennonite faith and examined the far-reaching outgrowths of those roots in the world today. I learned an important lesson: neither getting defensive nor feeling ashamed of my identity is the solution to this problem. Instead, I found myself considering a new insight: the global Mennonite church is as diverse as the many cultures we have represented here on campus—the time has come to stop seeing “Mennonite” as synonymous with “middle class North American.”

A couple of priceless experiences during my college years reinforced this idea for me. One was the opportunity to perform in Heavenly Voices, an ethnodrama telling the stories of several Mennonite women of color in the United States. These stories told of pain, bitterness, joy and ultimately hope and affirmation of identity. Another was working with a Spanish-speaking Mennonite church in Newton, Kansas one summer through GC’s Ministry Inquiry Program. My ideas about what “church” and “service” mean were stripped away as I was invited—slowly at first—into this close-knit community. These experiences to me were sacred: an invitation to make intercultural relationships an everyday reality, not just an ideal. Nine times out of ten, I fall short. But the opportunity is there.

The examples continue. As a musician, I have found countless mentors and opportunities to grow here at GC. Music has enriched my life and kept me busy in college. For me, music at Goshen College has been a lot of practicing, performing, and rehearsals – but not only that. I have learned here that being a musician comes with the opportunity – even the duty – of carefully and humbly expanding one’s own awareness and the awareness of one’s audience. Participating in the Parables music and worship team brought this close to home for me. Through making music together we wrestled with complex questions of identity, faith, inclusion, and institutional oppression. What emerged from this vulnerable process was a realization of the common human need to give and receive love. We carried this message into the music we shared with audiences of greatly differing perspectives. In the face of the silencing that individuals or groups face, music can be a means of empowerment and expression. I have felt called to bring my study of music into the realm of social justice as I leave Goshen and prepare to hopefully become a music teacher someday. Maybe Goshen College has made me into even more of an idealist than I already was – but I’ll take it.

In terms of academics, it’s not just every college where classes like Religion and Sexuality and Transforming Conflict and Violence exist. These two in particular have influenced me probably more than I even realize in the area of identity formation. TransCon was my introduction to the realities of power, privilege, and oppression, and presented some practical challenges for actually trying to be a peacemaker in everyday life. Taking Religion and Sexuality opened my eyes to a new way of seeing the world and my place in it: both positive, breaking the taboos against talking openly about sexuality, and negative, confronting sexism, heteronormativity, and sexual violence. I remember the palpable excitement among my classmates as we would leave the classroom and walk to lunch still discussing whatever topic we had covered that day in class. Even now, two years later, I continue finding connections between that class and my everyday life on a daily basis. This kind of academics just isn’t the norm at every school: at the risk of sounding cliché, I will venture to say that Goshen College really does create an environment of passionate learning.

To sum up, I have found Goshen College to be a place where people care. I have experienced that in countless late-night conversations with friends about everything from the environmental crisis to our dreams for the future to an analysis of the movie we just watched. I have felt that singing with the Women’s World Music Choir and joining efforts like the Positive Purple Pep Rally held earlier this semester. I have known that as faculty and staff have become friends and mentors.

I leave Goshen College both with appreciation and perhaps a challenge. How do I envision Goshen College in the future? As as place where all feel safe, where all can belong, and where all love – both on a personal and institutional level. We’re on our way, and I believe someday we can get there. I don’t know if a small, liberal arts college in the Midwest can actually change the world. I do know that we’re taking small steps in that direction, along with some failures. I am deeply grateful for my experience at Goshen College for equipping me with the tools to develop my skills and articulate my views, question and think critically, and confront differences with respect and dialogue. I will carry that knowledge with me as I go forward into my next stage of life.