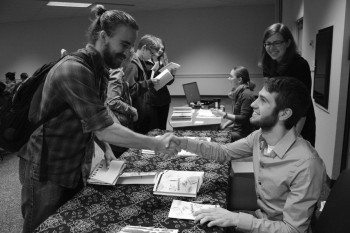 This Tuesday, March 31, three more Pinchpenny Press chapbooks were released to the public. One of these was the award-winning Red Cents, the college’s literary arts magazine comprised of short stories, poems, and art, edited by seniors Kate Yoder and Hayley Brooks. The other two were works from Kolton Nay, senior English writing major and TESOL minor; and Hayley Brooks, senior English writing major.

Tuesday’s release party was a chance for more student work to be recognized.

This is Red Cents’ tenth volume, comprised of selections by students from all disciplines across campus. Students were encouraged to submit works throughout the course of the year, and selections were picked in February. Students Maddie Gerig, Jacob Martin and Kayla Riportella read their works at the release party.

Red Cents began in 2004 when Rosanna Nafziger Henderson (’06) wished to see her peers’ work in print. Since its development, it has regularly been considered for awards from the Indiana College Press Association. In 2014 it won four awards in first and second place for poetry and short stories. Similarly, in 2013, the publication won six awards, including first place for best single issue.

Kolton Nay’s book, entitled “Imbalance,” serves as a memoir. It heartwrenchingly illustrates the confusion, tension and eventual resolution of Nay’s development from childhood to adulthood. During the release, he described it as “a memoir of scenes, still in progress, showing the reader the moments and trusting them to build the story in between.”

“Becoming Hallowed,” a volume of poetry exploring personal narrative intertwined with historical female figures, was Hayley Brooks’ writing project over the past twelve months. She shared insights into her writing style in a session at the Academic Symposium, in which she stated that her writing both began and ended with her body, and that writing serves as a medium to connect bodies together.