Annual Conference on Science and Religion 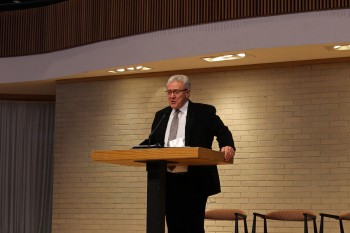 This past weekend, Goshen College held its 14th Conference on Science and Religion. The conference included discussion sessions, devotionals and several lectures with retired Princeton Professor of Philosophy Wentzel van Huyssteen. Van Huyssteen was born and raised in South Africa. His interest in religion comes in part from parents, who were missionaries. He has an extensive academic background in the intersection between science and religion.

Topics discussed during the conference ranged from free will to the distinction between humans and animals. Van Huyssteen addressed the human capacities for religion, morality and cognition.

“No language can be spoken for which the body is unprepared,” said Van Huyssteen.

He expanded on this idea in several lectures, saying that the ability to express ourselves as humans through symbols is what distinguishes us from other species. Furthermore, he said, the body speaks in many ways, including through mediums of music, empathy and sexuality. Van Huyssteen also emphasized the idea that consciousness is embodied and the physical realities of the body affect it.

Kate Yoder, a senior, spoke about ideas she found compelling from the conference. “People will use evidence to support whatever preconceived ideas they hold, especially with religion,” she said.

“Planning for this year[’s conference] began probably a year and a half ago,” said Carl Helrich, the physics professor who organized the conference. Helrich is already working on plans to invite the speaker for 2017.

The annual Goshen College Conference on Science and Religion began in 2001, with philosopher Nancey Murphy, who spoke about the soul. Helrich met the director of a similar conference shortly before that time, and the director persuaded him to attend their conference. Although skeptical, Helrich went, and found the conference so inspiring that he began plans to create a similar opportunity at Goshen College.

Those who attended the Science and Religion conference were greeted at registration with a booklet containing schedules, hymns and a name tag. On the cover of the booklet was a watercolor portrait of Helrich’s grandmother as a young girl. The inspiration for this cover art came when Helrich was considering the topic of the conference: personhood.

“My great grandfather’s painting of her at about age ten is on my office wall,” said Helrich. “It occurred to me that the innocent concentration of this young girl contemplating a bowl of radishes may be just what we need to speak to personhood.”