Kendall Friesen: the myth behind the man 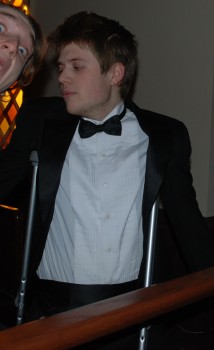 The K-master is caught unawares by a swift shutter. Note that this image was taken during his notorious “crutch period.”

A while ago, I encountered a certain individual who will remain anonymous when not referred to by pseudonyms such as “Kendall Friesen,” “Kendall” or “the K-master.” At first he seemed like just an ordinary guy with extraordinary hair and a shadowy past.

As I grew to know more about him some far deeper questions arose. I don’t happen to recall them now, but I’m sure they were indeed deep. I doubt I ever questioned his terrestrial origins, but now that I think about it I don’t believe I’ve ever established that Kendall is indeed not some form of alien.

But let us disembark from the heaving deck of the ship of speculation and walk across the dock of reason slick with the spray of logic away from the ocean of protracted metaphor.

Not long ago, I heard tell that Kendall had raised some frictional doubts with a patch of ice and that the cold surface had taken it quite the wrong way. Sure enough, a few days later I saw Kendall striding about with the aid of two aluminum crutches.

While quadrapedal, Kendall continued to go about his daily business.  But questions, as I will return to, as to the nature of this daily business remained unanswered. Needless to say, the K-master and his additional limbs moved surprisingly fast, covering the ground in great loping strides not unlike a silverback gorilla or werewolf.

Well, the end of February took a swing at us all and the Men’s Chorus found itself heading down to New Orleans with none other than Kendall Friesen in tow. It was on this trip that I saw a lot of Kendall as he flung himself across the New Orleans cityscape. I took careful notes.

But of late, as close observers will have noticed, Kendall no longer sports any crutches. For some time he was seen with a cane, bearing striking resemblances to any number of individuals from Charlie Chaplin to Dr. House. But then, just as abruptly, this too vanished and all that could be seen was the distant form of Kendall Friesen, limping off into the sunset.

What had become of him?

The answers are quite elusive. For one we must ask what Kendall did up until recently. For some time, Kendall spent most of his time simply getting to places.  Certainly he has spent some time in choir and orchestra, but what else?

Prolific funnies writer Eva Lapp wrote me. She asked: “What is he [the K-master] even doing with his time right now anyway? Only one class? No more crutches?”

Only one class? This is indeed news. What class might this be? And it is very true: without crutches, how is Kendall spending most of his time? Perhaps we will