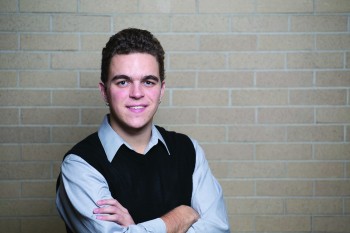 Instead of sleeping in and having some good old college free time this past Saturday, Paul Zehr spent the morning calling cues as head stage manager for the Winter One Acts, and then, following a short afternoon break, performed that evening as one of seven soloists for the 55th Annual Concerto-Aria Concert.

Like many theater and music performance majors on campus, Zehr finds himself committed to hours of rehearsal every day, in addition to other outside responsibilities.

Already this semester, Zehr represented Goshen College at the American Collegiate Theater Festival in Milwaukee as a scene partner for the Irene-Ryan Acting Competition. He was also cast as one of the leads in the upcoming spring mainstage, “The Boys Next Door.”

His commitment to theater-related events has kept him busy this semester, but Zehr doesn’t intend to forget why he finds theater relevant and important for him to do.

“Theater is important because it humanizes people,” said Zehr. “Theater makes you think. It defeats stereotypes. It’s raw and real.”

Zehr is a theater and music double major, so his commitments don’t just include time spent in the theater, but extend to performance of music as well. According to Zehr, these two fields overlap because theater influences his work as a musician.

“I need to have something that connects me to the music besides just the sound,” said Zehr. “Some people would argue that it’s all about the sound, but for me, that doesn’t cut it. It has to be a performance.”

Although Zehr’s love for performance is easy to recognize onstage, he doesn’t deny that he wrestles with difficult questions about the future.

Despite these difficult questions, Zehr is still able to remember many rewarding moments that encourage him to continue performing.

One of those rewarding moments came last semester when Zehr performed as Orpheus in GC’s mainstage production, “Eurydice.” Although the process of creating the complex play was confusing and didn’t always make sense, Zehr found it rewarding to see it all come together.

“That was the first time I really felt confident in the theater as a lead role,” said Zehr. “I knew who I was onstage and felt like I could react how I needed to.”

This idea of finding confidence from theater is one that has him thinking about a career in educational theater.

“When a student becomes an actor, it requires them to learn about themselves in order to explore something different than themselves,” said Zehr. “You don’t have to conform to societal norms that you fit into, and it can help boost your confidence.”

Instead of jumping into a career in theater after college, Zehr would like to take some time away from the theater. He’s hoping that this time will help him figure out what he wants to do with his life.

“In some ways, that makes me disappointed in myself because it makes me feel like I haven’t done enough work to find out what I like,” said Zehr. “But, I think there’s always a struggle to redefine what you want.”

In the face of an uncertain future in the arts, Zehr has managed to find a sense of contentment.

“So many other people have gone through this struggle before me, and they’ve turned out okay. Rather than get stuck in that uncertainty, I think it’s important to live past it.”