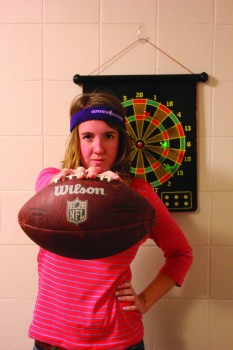 Sophomore Leah Landes makes up for a lack of football terminology with an excellent display of proper ball-handling.

If you’re anything like me, you typically don’t even bother turning to the Funnies page until you have dictionary.com pulled up and at the ready, prepared for whatever big word the Jantzes have made up this time. Luckily for you, this is the first time in history this won’t be necessary. I did some (30 seconds of) internet research trying to find a fancy football term I could casually drop, but I came up with nothing, so this article will be at a pleasantly manageable fourth-grade reading level.

As I’m sure you all remember from my last wildly successful Record article (and by you all, I mean my mom), I spent the last semester filling my brain with important and applicable liberal arts knowledge in Religion and Sports. Thus, it only makes sense that I would follow up my debut with an article about the greatest sporting event on earth: the Super Bowl. The bowl above all bowls.

This year’s Super Bowl party was held in Java, which makes perfect sense because it’s the connector with the highest couch to TV ratio (2:0) and also has a plethora of cold metal chairs and a concrete floor. The epitome of cozy. (Note: Fourth-graders are reading at a much higher level these days than they were in 2003. “Epitome” is a perfectly appropriate vocabulary word). Unfortunately, I can’t poke fun at the venue too much since I stayed for approximately 2 minutes to get some pizza and then remembered that I don’t like football or crowds of people or coffee. I also realized that I understand so little about football that watching the game wouldn’t actually add much to the article. I seriously hope nothing too funny happened during the game that I missed out on. If it did, pretend that I’m referencing it right here:

Sports aside, I do love the commercials during the Super Bowl. They’re the American Dream: a perfect blend of blatant sexism and heart-warming car ads. Being from St. Louis, I also live for the Budweiser commercials, which disregard women and cars altogether and feature the unlikely friendship of large horses and a puppy. For those of you who don’t know (which should be all of you, Goshen being a dry campus and all), Budweiser is what you give your puppy when it’s really late and you just want it to pass out and go to sleep. I’m not sure what would happen if you gave Budweiser to a horse—I’ve never tried it (not for lack of wanting, just lack of funds).

Much like the event reports in Religion and Sports, I’ve now spent more time writing this article than I spent actually watching the Super Bowl. I can only hope Paul Keim can’t tell.