Art exhibit continues for another month 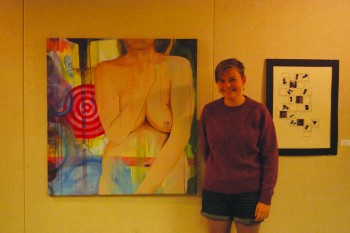 Ardys Woodward, sophomore, poses next to her artwork at the “Tolerance and the Other” student art exhibit.

Since November 19th, student artists have been displaying their work in the Good Library Basement Gallery in an exhibit entitled “Tolerance and the Other.” Students were challenged to reflect on the theme of “Tolerance and the Other” and create artwork that would give viewers an opportunity to view themes of tolerance from new perspectives. The result was a variety of different pieces done with a variety of different mediums all working to capture one open-ended theme.

Ida Short, a senior visual art major and piano pedagogy minor, submitted two pieces for the exhibit: a photograph titled “Human Trees” and a painting titled “Tolerating Myself.” Short recognizes the fear and insecurity that comes from publicly sharing one’s work. Displaying artwork in an exhibit, such as the current display in the basement of the Good Library, is a very vulnerable process for artists, but a very exciting and rewarding one as well.

“I love realizing that there can be many ways of viewing a piece of artwork depending on what experiences you as a viewer bring to the piece,” said Short.

Fortunately for Short, she and several other artists were given the opportunity to present their pieces in convocation last Wednesday. Following convocation, the entire student body was invited to the basement of the Good Library to view the exhibit. Students who would otherwise not know much about the exhibit were given the opportunity to see and hear about pieces of artwork from the artists firsthand.

“It can be really validating to show everyone all of the amazing work that happens in the art building,” said Short, who presented on her painting, “Tolerating Myself.” Among many other ideas and themes, Short’s painting was about extending love not only to others, but also to herself. The suggested theme immediately brought Short back to SST when she had to learn to live with herself and a foreign Tanzanian culture. According to Short, many people connected to the painting because of similar experiences they had when returning from SST.

“Sometimes it can be a little hard to share personal artwork and have others see it a different way,” said Short, “but the reward is even greater when that artwork can connect to a variety of people and experiences.”

Short’s work and the rest of the “Tolerance and the Other” exhibit will be open for viewing until February 18th. The exhibit is free and open to the public.