Reuben Ng: On his return to obscurity 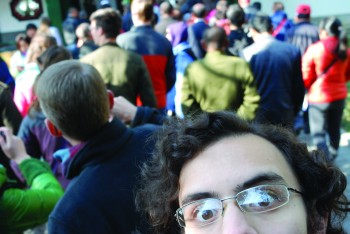 A key component to a meaningful SST experience is the right attitude, in this case, fear.

Good evening.  Of course you may have begun reading this at some time other than evening, and if that is the case please set this article aside until evening has arrived, along with the drama and allure that so readily accompanies it.  At the very least, draw the blinds and squint your eyes knowingly and/or enigmatically.

The proper atmosphere now established, and all other matters of ambience aside, I feel it is now appropriate to introduce myself.

My name is Reuben Ng and, to be perfectly blunt, you either know me or you do not.  Nevertheless as an agent of truth I feel the need to give you a brief background of myself.  I was, and I still am.

And yet I feel the usual platitudes are necessary here, too.  I have been a funnies editor in times past, have written several notable pieces and several even more notable Communicator Announcements, and recently have returned from a brief stint on Study Service Term, or SST, in China.  This final topic I’ve found fit to discuss in some capacity here.

What should be apparent to anyone (whether you have gone on SST or not), is that the most defining characteristic of SST is that you return.  Sooner or later you are back where you started and at least physically not much different for it.  Not one person in my SST unit so much as lost a limb!  And what’s equally important is that nearly everything you’ve left behind is still there, waiting and virtually identical.  Not a single one of my so-called friends here has lost any sort of appendage either.

Personally, I have found this all a little underwhelming, but that is only half of the disappointing story (sometimes referred to as “my life”).

As I was able to say in the Record last semester, there are two types of people: those who have forgotten me, and those who never knew me to begin with.  Since returning to Goshen, I’ve confirmed the presence of both groups and have also discovered a third: those who feel they should remember me.  I like to call these people “my friends”.  I can’t claim to be really helping this situation.  My current off-campus domicile (although alarmingly close to campus), and my lack of even such basic necessities as munch money or a meal plan, mean my interactions with others can almost be completely eliminated.

Keeping a low profile is just one of the many difficulties one faces on return from SST—a person’s hard-won obscurity is all too easily lost on a campus like this.

All in all though, I suppose I have returned at the best possible time. It is this time of year during which the glaciers rumble down through Elkhart and envelop Goshen, and when glimpses of yeti-like creatures are caught amidst flurries of snow.  (The latter has been attributed to unfortunate holdouts hearkening back to the infamous days of “No-shave November”.)  The wonderful freeze-thaw cycles have taken hold, leaving behind marvelously treacherous ice patches, specifically on the stairs leading to my accommodations.  Such surroundings do indeed bring a level of clarity and perspective. I’ve already begun drafting a will and parts of a eulogy.

At this point, I really do have very little left to add.  I hope this introduction has proved adequate for your understanding of me, although I would be somewhat surprised at that outcome.  I suppose, last of all, I should apologize in advance for all the ramblings and nonsense you’ll have to endure from me.  But after all, that’s what they pay me for.  Wait.  They don’t pay me.