Residents to ‘intersect’ at First Friday via Goshen Commons 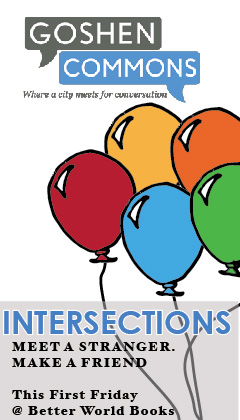 GoshenCommons.org will host a live event this Friday

The goal is to engage community members in intentional conversation with one another, to find surprising commonalities and celebrate rich differences.

Participants will be given a seat at a table for two and a bunch of balloons. They will either join another participant waiting at a table, or wait for someone to join them.

Instructions at each table will guide the pair to pull down different balloons with questions to ask their conversation partner. This intersection point allows First Friday goers to get to know a fellow community member through brief, insightful conversation.

The conversation questions will encourage participants to share glimpses of their stories. For example, one question will be, “What was the happiest moment of your life?” and another, “If your life was a story, what would the title be?”

With the help of Goshen Commons, she is collecting stories from anyone who lives in Goshen for an interactive display in June.

“This event is just one. We are also asking local middle school students to take portraits and gather quotes from their friends, family and neighbors; we are sending casual photojournalists into public spaces to interact with community members; we are collaborating with neighborhood commissions and local churches to gather the voices of different segments of the community; and we are inviting any Goshen resident to participate by interviewing a neighbor and sending their quote or story to the Humans of Goshen team.”

“In the end we will present a display of portraits and stories that represents many faces of Goshen, that inspires viewers to reach out and befriend a neighbor, and asks the deeper question: What are the untold and unknown stories behind and in the blank space between each of these faces?”

If you are interested in participating in the Humans of Goshen project in any way, contact Klassen at sara.r.klassen@gmail.com