This weekend I had a trance-like cinematic experience. The Goshen Art House was showing the wordless documentary “Samsara,” and I seized the opportunity to experience this independent film in an independent theater.

I almost couldn’t find the theater at first. When I arrived at 211 S. Main St., my GPS helpfully informed me that I had reached my destination. I disagreed. All I could see were a multitude of closed stores and restaurants with their lights off and chairs piled on tables.

Then I remembered that the Goshen Art House is located in the same building as the Back Alley Brewery. As the name suggests, the entrance to the brewery is in the alley, not on the main road. I parked my car in the lot behind the alley and made my way up two flights of stairs to the Goshen Art House. 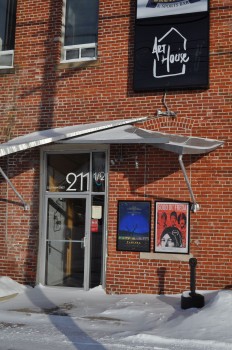 I was late to the movie, so the lights in the theater hallway were all off. I could hear music playing softly, so I followed this sound until I came upon a small box office/concession stand. I informed the girl behind the counter that I was a student and was there to see the movie.

“It’s six dollars per ticket for students,” the girl said. I paid my fare and she led me to a large black curtain. “I’ll just let you in. Sit wherever you want,” said the girl as she pulled back the heavy velvet cloth and ushered me in.

About fifty plush theater seats rested on a wooden platform. I chose to sit in the last row. A raw brick wall was to my left, and the floor was polished wood, a welcome change from the carpeted walls and sticky floors of large movie theaters. I settled in and began to take in the movie, striking images crisply projected on the large screen.

A group of Buddhist monks made a complex sand mural; Thai dancers stood in an intricate formation, arms outstretched, showing off the long metal talons on their fingers and their carefully beaded gowns; cars rushed past each other on the complicated freeway system in Los Angeles; the splendor of nature all around the world was shown in bright colors, with trance-like music playing. I felt the beauty of the world around me.

I was feeling meditative and at peace when suddenly everything changed. The music shifted from twinkling and soft to harsh and foreboding. A performance artist smeared clay on his face, repeatedly making grotesque expressions with black and red paint and violently poking holes in the clay to create eyeholes and a gash for a mouth. Chickens and cows were shown being slaughtered. A single tear rolled down a Geisha’s cheek. People sifted through mounds of garbage to fix the lean-tos that in no way sheltered them from Tsunamis and earthquakes.

I left before the movie was over, feeling shaken at the sight of children holding machine guns. My breathing was unsteady as I made my way back from the darkness of the theater to the well-lit flight of stairs leading back down to the brewery.

I got in my car and I turned the key to the ignition. I sat still for a few minutes, ruminating on what I had just experienced. Even though I felt unsettled, I knew I would be back to the Goshen Art House. I loved the brick walls and wood floor and dark hallway. I loved the velvet curtains and the homey feeling of the small theater space. I knew that if this movie theater didn’t exist, I wouldn’t have even heard of “Samsara.” While the movie left me profoundly unsettled, the theater was a breath of fresh air.