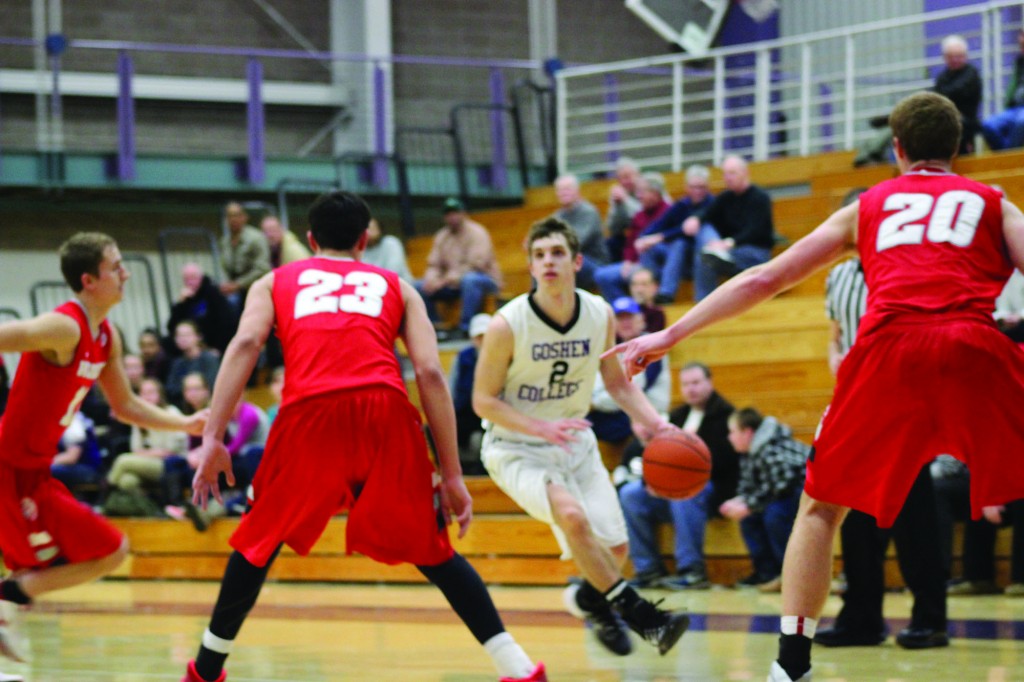 The Goshen College men’s basketball team had a Western-movie feel to it this week. Saturday afternoon, there wasn’t enough shooting. Tuesday night, there was too much.

When all the dust had settled, losses to Taylor and Indiana Wesleyan left the Maple Leafs ninth in the Crossroads League.

Saturday in Upland, Taylor scored the game’s first basket after six seconds and never surrendered the lead. Goshen fell behind 35-23 at halftime en route to a 73-57 loss. The Leafs never trailed by more than 21 points, but couldn’t close the gap to within 12 in the second half.

Despite 14 points from Billy Geschke, a first-year, the rest of the offense sputtered; Goshen shot 42 percent from the floor, but only 6-for-22 (27 percent) from three-point range. The Trojans out-rebounded the Leafs 34-23 and Goshen turned the ball over ten times, so there simply weren’t enough possessions to outscore a Taylor attack that put four players in double figures.

Seventy-four hours later, possessions were not the problem in a game that had 108 shot attempts. But the Indiana Wesleyan offense, which made two-thirds of its shots and more than three-quarters of its two-point attempts, ran like a tremendous machine en route to a 92-78 victory.

The 13th-ranked Wildcats were paced by D.J. Bettinger, a junior guard who made eight of his ten field goals, all of which were from three-point rang, finishing with 25 points. Jerron Jamerson, a senior, led Goshen with 18 points, and all of Goshen’s starters scored at least 10 points. The Leafs bested their season average from the floor and from beyond the arc, but the Wildcats’ pressure on the interior of Goshen’s 2-3 zone would prove insurmountable.

Tuesday night marked the scheduled midway point of the conference season. Thanks to the snowstorm earlier this month, the Leafs have played only eight of their 18 league games while sitting 1.5 games behind Taylor for the final spot in the conference tournament. Goshen returns to the floor Saturday afternoon at Spring Arbor.