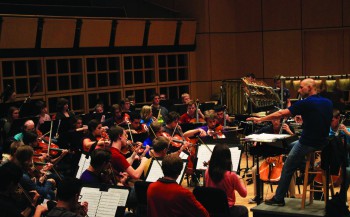 The Goshen College Symphony Orchestra will hold its fall concert in Sauder Concert Hall at 7:30pm Friday. The concert will have a few interesting surprises.

This concert will feature classical compositions such as “Serenata Notturna” by Mozart and “Hungarian Dance No. 1” by Brahms, and will conclude with an exciting finale—the Midwestern premiere of a new concerto composed by Michael Udow, professor emeritus of percussion at the University of Michigan.

Udow’s piece, “Moon Shadows: Concerto for Solo Multiple Percussion and Orchestra,” draws inspiration from ten Japanese haikus about the moon. The piece is meant to be transparent and beautifully simple to reflect the nature of haiku.

To perform the solo in “Moon Shadows,” guest soloist Anthony DiSanza, professor of percussion at the University of Wisconsin-Madison and former professor of our own Dr. Fashun, will be in attendance at the concert. Friday’s performance will be the first of many planned performances to prepare for the recording session next spring with the Rice University Symphony Orchestra.

Udow commented that his writing of “Moon Shadows” was influenced by the time he spent with DiSanza in Japan performing other musical compositions for large audiences. He and his wife, Nancy Udow, traveled around the U.S. for 15 years as an ensemble with percussion and dancing performing the first version of the piece, “Over the Moon.” Once they retired from performing the piece, Udow rewrote it for symphony orchestra as well as for the continued percussion element.

Before Goshen College’s performance of the piece on Friday, the piece will have only been performed once as a symphony orchestra piece by the Bozeman Symphony Orchestra in Montana, and once by the University of Michigan as a wind arrangement.