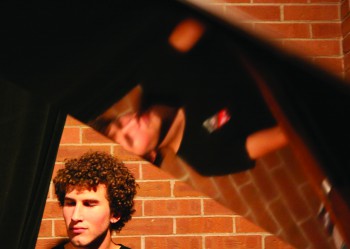 Inspired by the image of a woman from a photography collection titled, “The Family of Woman” and by his own recurring images as a child of a brush fire, Henry Stewart composed an original piece titled “Threnody/Images” as a second-year GC student and submitted the piece to the London-based New Works Competition. Fresh-faced and green, Stewart discovered to his great astonishment that his piece was selected as one of six finalists from among 54 entries.

After the top six entries were selected, the voting became public, and Stewart found himself in the competition’s top three; buttressed by the support of family and friends, Stewart caught a spontaneous flight to London for a three-day tizzy of rehearsals, recitals and awards.

Nearly two years later, the Villiers String Quartet—the London-based group that established and directed the competition—came to Goshen to return the favor.

The Villiers String Quartet performed last Friday at 7:30 p.m. in Goshen’s own Reith Recital Hall. On tour in the United States, the Quartet paid a visit to Goshen College to recognize and honor Stewart and to perform his winning piece, “Threnody/Images.”  Stewart, who attended the performance, said of the quartet’s performance: “It is always an honor to have music performed by such talented musicians as the Villiers Quartet.”

Stewart’s piece is a program piece, meaning it attempts to illustrate a narrative through music. “Threnody/Images” was inspired by the headshot of a woman from a photography collection by Jerry Ed Mason, “The Family of Woman.” Equally inspired, however, by a bout of delirium Stewart experienced as a child, the piece also integrates Stewart’s vision of a brush fire, an image he revisited throughout his childhood. Stewart later asked a friend to sketch the two images—the woman and the fire—and he let that sketch “represent who I saw. I wrote about her, and another image representing her anger.” Stewart’s piece unites these two images.

The members of  the Villier’s Quartet arrived in Goshen last Thursday evening. Stewart invited the four performers to dine at his off-campus house, and the following day the performers visited music classes and conducted workshops for student musicians before performing in Reith Recital Hall Friday evening. Stewart was very pleased with the performance. Still, Stewart noted that “there were little liberties that they took. Writing for a string quartet, you have to recognize that it’s an elastic ensemble.” Nevertheless, Stewart was more critical of himself than he was of the ensemble’s performance.

“The music doesn’t live in the page,” Stewart said, “but you have to store it there.” As he heard the piece performed, Stewart recognized where and how he could better communicate his artist’s vision through the piece’s notation.

For Stewart, participating in the competition was a formative part of his developing musical career.

“It was nice to have a little bit of validation,” Stewart said.

After placing in the competition’s top three, he finally “gave studying composition some legitimacy.”