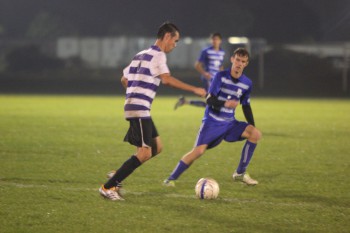 Chris Vendrely, a second-year, maneuvers the ball toward the goal at the men's game Tuesday night. Photo by Hannah SauderTony Miller

Opportunity may knock more than just once. But whatever the number, its knocks are finite. Goshen and Bethel learned this the hard way Tuesday night as they were held scoreless for the final 40 minutes of a 3-3 double overtime men’s soccer draw at the Goshen College Soccer Complex.

Bethel finished the night with an 11-7 edge in shots on goal, but Goshen struck first. Sixteen minutes into the contest, Josh Stoltzfus, a first-year, dribbled around one defender and fired from the right side of the penalty area to put Goshen up 1-0.

Bethel tied the score on a header from the left side with 12:30 left in the half and the match went to halftime at 1-1. The same Pilot, midfielder Pedro Amaral, knocked home a cross with 31:07 to play and Bethel had its first lead of the match.

That advantage would last all of 62 seconds. Jordan Berkey, a senior, received a pass at the top of the box, drawing the goalkeeper off his line. With the final defender sliding toward him, Berkey tapped a pass to Stoltzfus, who scored into the empty net and tied the score 2-2.

In the next ten minutes, traffic would help Bethel untie the game and Goshen re-tie it. Ricardo Zambonino lobbed a shot in a high and narrow arc into the top of the goal for another Pilot lead. Less than two minutes later, Joe Gunden, a senior, cleaned up the third rebound of a shot from Chris Vendrely, a sophomore, and the score was tied 3-3 with 21 minutes left in regulation.

The final minutes of regulation saw play continue mostly in the middle third of the field, with an attack or two in either direction coming up fruitless. Bethel had the lone shot on goal in overtime, though the Maple Leafs sent three balls wide of the frame at close range in the last eight minutes.

Like every good rivalry, the game was riddled with contact. Eighteen fouls were called, to say nothing of the players who fell to the turf as play continued unencumbered around them. Two players from each team were given yellow cards, and the referee stopped play three more times to advise players and coaches about sportsmanship.

With the draw, Goshen clinched a spot in the postseason Crossroads League tournament with a 3-3-2 record in conference play. Bethel’s conference record falls to 4-2-2 in league play. Neither team can finish higher than fourth or lower than sixth in the regular season.

With one round of regular season matches remaining, there is much up for grabs for tournament seeding. Goshen could finish fourth, but they would need help from Marian. The Maple Leafs finish their regular season Saturday night at Taylor University in Upland; playoffs start a week later against Indiana Wesleyan, Spring Arbor, Saint Francis or Bethel.