On Tuesday evening, donors, supporters and film enthusiasts received a sneak peak into what Art House, the new indie film and live performance theater, has to offer downtown Goshen.

“We mostly just want to get people in the space to show them what we’ve been dreaming about,” said Artistic Director Adrianne Nesbitt, whose brainchild is becoming a reality.

In Early September, Nesbitt, board members and supporters began converting the former New World Arts space into an independent film space.  But they have also retained a black box theater which, according to Nesbitt, will be used for live theater performances, cd-release parties and small concerts.

After receiving a grant from the Elkhart County Community Foundation of $15,000, Art House board member Keith Heibner initiated a fundraiser via kickstarter.com–an online resource for raising money.

By reaching the end goal of $15,000 in fundraising, coupled with the receipt of grant money, Art House is ready to become a fully functional indie film theater.

But the end goal for Nesbitt is not specifically to air movies, serve pretzels, popcorn and beverages, but to engage the surrounding artistic community as well.

“We’re really wanting to support local artists and what they’re wanting to do and accomplish” said Nesbitt.  The black box theater will be the mainstay for this endeavor, and Nesbitt hopes it will also facilitate eventual classes for writing workshops, acting lessons–“anything related to theater, music, or film,” she said.

But for now, the primary goal is sustainability.

“Film is going to be the bread and butter,” said Nesbitt.

For the month of October, the Art House will be nothing less than a flurry of activity.  At 9 p.m. Friday, Art House will host an improv show.  Auditions for the production of A.R. Gurney’s “Sylvia,” which will be performed on Nov. 15, will begin at 2 p.m. Sunday.

The weekend immediately following Thanksgiving will hold an “I need a break from my family” movie marathon and throughout October, Art House will be playing Halloween themed movies, all of which will be free to the public.

House on a Haunted Hill will be shown at 3 p.m. Saturday and at 8 p.m. Monday, the 1922 German silent film “Nosferatu” on the 12th and 14th at 8 p.m., and “Night of the Living Dead” on the 19th at midnight as well as the 21st at 8 p.m.  October will come to a close with a Halloween Movie Marathon, with details available upon inquiry.

More information can be found on Art House’s Facebook page, by emailing them at info@gah.mobi, or by leaving a voicemail at 538-2434. 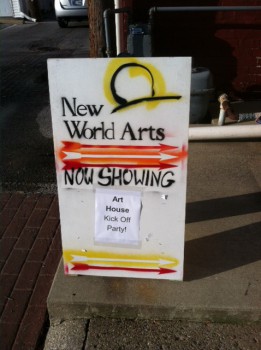