The Goshen College softball team snapped a 17-game losing streak against local rival Bethel on Tuesday as the Maple Leafs split a doubleheader, losing 2-1 and winning 3-2 against the Pilots in Mishawaka. The win ends a losing streak that dates to May 6, 2004, when the Leafs beat the Pilots 2-0.

The first game was played under heavy cloud cover, with a fourth-inning burst of rain sending spectators scurrying for cover. Starting pitcher Maria Koshmider, a senior, recorded two quick outs before two singles, a walk and a wild pitch got Bethel the contest’s first run. But the Leafs induced a strikeout, ending the threat for the moment, and both teams went down in order until the third.

When Goshen scored, again the damage was done with two outs. Pinch-runner Morgan Owens, a first-year, was on after a walk, moving up 60 feet on a sacrifice. Melanie Meyer and Sam Langley, both sophomores, poked consecutive singles through the infield: Owens came in to knot the score at one, but Langley was put out trying to get into scoring position and, again, the threat was extinguished.

Bethel added an insurance run on a bases-loaded walk in the fifth; both teams were retired without incident in the sixth. With one more chance to tie the game in the seventh, leadoff hitter Kerri Doutlick whacked a leadoff double, but three ground balls ended the frame with the runner stranded at second.

In game two, it was the Leafs’ turn to strike first. Once again, the scoring occurred with two outs. Jana Beitler, a senior, singled, which Meyer followed with a three-base hit. But the cut-off throw to third base went awry, and with the ball in an unexpected place, Meyer scampered home for a 2-0 Goshen lead.

Starting less than an hour after her relief appearance in the opener, Blankenship retir 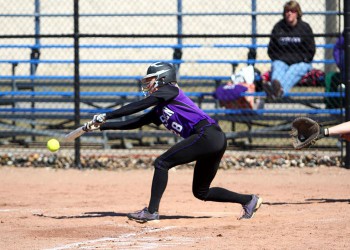 ed Bethel without a hit the first time through the order. But a single ended that streak to lead off the fourth; after a strikeout of Bethel pitcher Natalie Newell, who played for Goshen coach Lee Mast in high school, reigning Crossroads League Player of the Week Jessica Ewen homered to cut the deficit to one. But the next two hitters popped out to Langley at second without incident; again, the threat was eliminated.

Goshen nearly extended their lead twice more — once in the fifth, when a rally keyed by Blankenship’s double loaded the bases but left them full, and once in the sixth, when the first two batters reached on an error and a walk and were left aboard. Save for a leadoff single in the seventh, Bethel went down quickly in their last three innings and the Leafs were victorious.

Blankenship took the win, allowing three hits and striking out 10 to finish 9 1/3 innings of work on the day; Meyer was 4-for-6 with two steals.

Goshen hosts their next 12 games, starting with a doubleheader against Grace this afternoon. Bluffton (Friday), Calumet St. Joseph (Saturday) and Indiana Wesleyan (Monday) also come to town in the coming week.