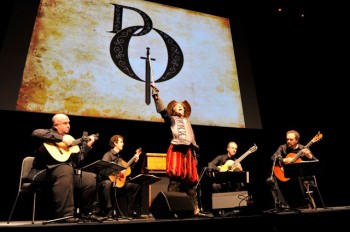 Philip Proctor’s family first realized he had a gift for music when, at four months old, Phillip hummed back the hymn his grandpa was singing to put him to sleep.

This, jokes Proctor, was quite likely his first and last free performance.

Now, after 63 years of acting, music, writing and producing, Proctor is returning to Goshen for a concert with the Los Angeles Guitar Quartet in the community he once called home.

Proctor’s career includes a wide range of award-winning work, from founding and performing with the three-time Grammy-nominated comedic quartet, Firesign Theatre, to Broadway and off-Broadway shows, to the voices of characters such as Howard in “Rugrats” and the villainous Dr. Vic in the video game “Assassin’s Creed.”

Proctor was born in Goshen, and though he moved with his family from Elkhart County to New York at age four, he still considers Goshen the place where he grew up.

“I was schooled in New York,” Proctor said, “but I spent all my summers back in Goshen with my grandparents.”

Proctor remembers his childhood in Goshen as a “wonderful, carefree experience,” noting the long list of adventures he and other neighborhood kids were a part of, from catching frogs and playing at the dam to riding bike and building model airplanes.

“Oh, we just had a lot of fun,” Proctor said. “We knew Goshen through all the alleys like the back of our hands, because we were on our bikes all day.”

In addition to fond memories of exploring town with other neighborhood children, Proctor also took from Goshen a feeling of connectedness to his family and their Amish roots.

Proctor’s great-great-grandmother’s story of marrying into the Amish is recorded in the book, “Rosanna of the Amish,” which was written by Proctor’s great-uncle, Joseph Yoder.

Proctor speaks highly of Yoder, crediting him as the likely source of his gifts in music, writing and acting.

“He had music abilities, he wrote down hymns of the Amish…he had a great baritone voice,” Proctor said. “[He] defined the Amish tradition for a lot of people in the nation.”

“I always felt an easy communication with the Amish way of life,” Proctor said.

Proctor’s family was also very musical, which helped encourage his career from early on.

“Because there was always singing around the house and because I was encouraged to be a part of it, I always had fun doing it,” said Proctor. “Joke telling, singing, playing piano…it became a very easy thing. I felt absolutely comfortable performing in front of people.”

Although Proctor began performing in elementary school, he resisted fully entering show business until during his college years at Yale, when an agent from New York spotted Proctor and signed him.

“I decided to commit to that,” said Proctor, explaining how his work became more and more recognized in New York. “It just escalated,” he said.

It was at this time that Proctor discovered that in order to be successful, he needed to watch other actors as well as look for as many opportunities as possible—advice he offers to young people pursuing a career in show business today.

This philosophy, combined with his array of skills, has led Proctor to a career full of variety.

“I love the mix of it,” said Proctor, mentioning his work in a number of areas, such as film, live theater and radio. “I love doing it. Everything is a different kind of challenge.”

And now, Proctor is looking forward to bringing his work back to Goshen in a performance with the Los Angeles Guitar Quartet.

“I’m so grateful to have the opportunity to perform this wonderful piece in Goshen,” said Proctor, who adds that he is delighted to collaborate with the “brilliant master musicians” of the quartet.

While in Goshen, Proctor hopes to reconnect with relatives and friends.

“I feel more of an anticipation about this opportunity than just a normal performance,” said Proctor. “[This is] a special chance for me to reconnect with my roots, really. What a wonderful opportunity has been given to me to do this.”