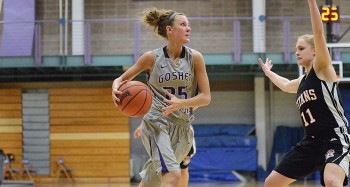 In the contest’s first couple of minutes, Goshen trailed 4-2; further action would favor Mount Vernon considerably, as the Cougars led 33-16 at halftime, then 52-21 and 70-28 in the second half.

The longest bus ride in the Crossroads League, four hours and 250 miles, appeared to take its toll on Goshen in the first half. The Maple Leafs were just 5-of-25 (20 percent) from the floor before halftime and 8-of-45 (18 percent) for the game. Furthermore, the Leafs were shorthanded: with only Avery Bischoff, a sophomore, and Abby Short, a first-year, available off the bench, all seven players saw action for at least 20 minutes.

Paige Davis, a senior, led the Leafs with eight points, followed by Bischoff and Liz Tecca, a first-year, with seven each. A trio — Short, Tecca, and Sam Hawk, a senior — led Goshen with six rebounds apiece.

With those possessions, the hosts went on a 21-2 run in the first half and a 30-10 run in the second. The two runs combined to take about 15 minutes, outside of which the teams tied at 21.

Mount Vernon shot at 38 percent from the floor and 24 percent from three-point range; Goshen made 19 percent of its threes, and both teams were 13-for-14 (93 percent) at the free-throw line.

Barring a tournament run or construction setback, the game was Mount Vernon Nazarene’s final women’s contest in the Physical Education Center; a new gymnasium is set to be completed this summer.

With the loss, Goshen falls to 2-25 (0-15 in Crossroads League) on the season and was eliminated contention from the Crossroads League tournament. MVNU is now 8-18 (5-10) and tied with Marian for the number-seven seed.

Despite the end of Goshen’s own tournament campaign, they will get the chance to play spoiler for other teams: the Leafs’ last three opponents are first, sixth and ninth in the conference. The 2013-spoiler era will start at 1 p.m. Saturday when Spring Arbor (9-18, 3-12) comes to the Gingerich Center; a Goshen win would also put Spring Arbor on the brink of elimination.