America by rail: Appreciating the space between two homes 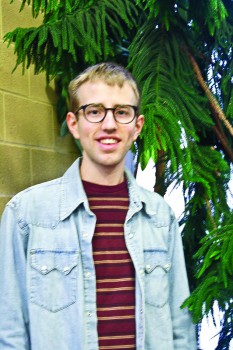 When it comes time to go home for Christmas vacation, the normal routine for many college students may be to stuff as much dirty laundry in the car as they can and hit the road. Or, after responding to those “seeking ride” communicator announcements, some may pack in as many other students as possible and make multiple stops on the way to Pennsylvania, Iowa or some other Mennonite mecca. Some of you may even be able to walk home for break. Finally, I recognize that some in our community are unable to travel to their homes in other countries around the globe.

My home is the Old Pueblo, officially known as Tucson, Ariz., a city of one million spread across a Sonoran Desert valley and crowned on four sides with magnificent “sky island” mountain ranges, where ecological life zones go from desert scrub to spruce/fir forest within an hour’s drive. We are only 100 miles from Mexico and have a beautiful blend of cultures. When it came time to decide where to put important institutions, Tucson got the land-grant university, and Phoenix got the state prison (they now have a university as well). Phoenix has lawns; Tucsonans install drought-friendly xeriscaping. Yes, it’s a dry heat.

So, back in the middle of last semester when the chill started to set in on Goshen, trees started running out of leaves to drop and academic stressors began assaulting me head on, I began dreaming of my 296-days-of-sun Arizona home. When my father asked if he should reserve my flight, I surprised him by saying I would be taking the train. My reasons were varied but well-founded. He consented. A quick search on the Amtrak website had revealed that I could get from South Bend to Tucson without stepping in a car or plane. I would take the South Shore Line to Chicago. Then, the “Texas Eagle” promised to carry me deep into the heart of the Lone Star State, and the “Sunset Limited” would take me the rest of the way, winding through the Chihuahuan Desert and along the Rio Grande. This sounded a lot more romantic than Flight 264 and a packet of peanuts, served with a side of high-fructose corn syrup and some radiative forcing.

I had grown weary of the TSA, the full body scanners, the ridiculous security announcements, the $25 for first checked bag and the poster child of our petroleum-slurping economy that is air travel. Train travel uses less fossil fuel energy per passenger per mile than either airplane or automobile travel, and is one way that travelers can reduce their carbon footprint. My decision was ecological. It was also based in my new emerging ethic of place consciousness.

In order to fully understand and appreciate the differences between my college home and my desert home, I needed to travel the breadth of the margin that separated them. I needed to run my fingers, or at least my eyes, over the landscape between these two worlds, which so often seem disparate. Most of my college friends may never see me in my element, which is the Sonoran Desert in all its mystery. While I could not take any of my friends along (this is your open invitation), what I could do is live a little in the in-between while the train and tracks zipped up the two halves of my life like two sides of a sweater.

The value of the journey itself was manifested as I talked, shared and encouraged others who were also in transition between two spheres of life. How soon after an airplane flight do you forget the name of your seatmate? When I have flown before, I usually cannot wait to get off the plane, and my mind dwells on the destination; I have no concern for the cares or needs of the others on the plane. Choosing to take the train was an invitation to an alternative. Sitting up in those silver railcars, we discussed theology, music, gun violence and college life. We had table fellowship in the middle of some of America’s most scenic desert wilderness and while passing the back door of some of our dustiest cities.

Arriving at home, and close to tears, I shook the hand of my seat-mate, Tom, who was traveling all the way back to Fresno, only to pack up his car and move. His troubles were paused for a day or two as we shared with each other our favorite Emmylou Harris songs, our love and need for family, our faith and reliance on God. “I’ll never forget you,” we both said, and meant it. We had both been witness and participant to an act of shalom, of sharing along life’s pathways, and I knew then that God is indeed present in each of us; God was in Tom and in the young boys who waved at the train from the Mexican side of the fence as we passed through El Paso. When I stepped off into the warm desert air that evening and delivered myself to the arms of my family after 52 hours on the train, I had learned in a new way what it truly means to come home.