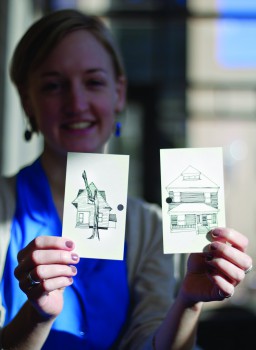 By Christina Hofer, Arts Editor
Have you ever looked at other people’s houses on Google Maps, zooming in to get a close-up view of the porch, the windows, the doors—every external detail?
That is what Abbie Miller, a senior art major, did to create what she has named “The 8th Street Project.”
After taking contemporary art history, an upper level art class, Miller started thinking about things she saw in her everyday life as inspiration for her work. She began by drawing the houses on 8th Street in Goshen, each house on one library catalogue card. Then she began looking at other 8th Streets across the country via Google Maps, including 8th Streets in New York City, New Orleans and Douglas, Arizona. According to Miller, the places represent different regions within the United States, allowing viewers to visually compare residential areas with the same street name but widely different characteristics.
“In a way, this project is kind of like a homemade Google map,” said Miller. She is aware that people sometimes refer to Google Maps as an invasion of privacy, but she wants this project to inspire those types of questions. “Are my hand-drawn pictures of other people’s houses just as invasive?” asked Miller, leaving the response up to those who see her work. Miller plans to complete the project by stringing together all of the library cards to create one continuous 8th Street.
Miller is not only skilled at drawing, but at photography and painting as well. As a sophomore in high school, she bought her first camera. She loved photography so much that she invested in a professional camera, taking pictures for enjoyment and for pay.
Miller has recently been utilizing those same business and art skills as an intern at the Midwest Museum of American Art in Elkhart. Her work at the museum consists of cataloging and organizing, working with artists as they submit their work, planning receptions and events, learning how to handle different pieces of art and helping arrange art shows.
“I was pretty much able to do everything that I was interested in,” said Miller, mentioning a position at the museum as a possible career choice. “I love working at the museum.”
Despite the amount of time and skill she has put into the arts, Miller has only been an art major for about a year. Her reluctant decision to major in art came after spending a semester in Peru. “I didn’t want to give in and do it,” said Miller. “I think because that’s what everyone thought I would do.”
Now, as a senior finishing her last semester, Miller realizes that becoming an art major was a decision that she had to make. “I want art to be a part of my life,” she said, referring to her future in the arts after college. “As a creative person, I think it’s how you ask questions and answer them in daily life.”
Both inspired and intimidated by the professional level of artwork she has seen, Miller knows that the only way to success is through failure. Even while preparing her senior show, Miller accepts criticism as a way to become a better artist. “I think what moves me forward the most, is sitting down, doing the work,” Miller said. “It may fail, but that will move you forward.”
The “8th Street Project” and other drawings by Miller will be displayed at the second senior art show in the Hershberger Gallery, March 31-April 17.