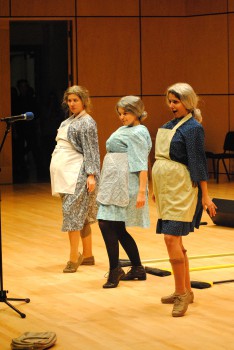 Goshen’s biannual talent night brought raw talent and strong competition to a big stage, but it was Mara Weaver and the seniors who stole the show.

The ensemble, made up entirely of seniors, performed a rendition of “Some Nights” by Fun that incorporated a large choir, a choreographed stomp team and an array of musical instruments that impressed the judges enough to place first among tough competition.

“It was like comparing apples and oranges,” said Skip Barnett, one of the four event judges. “[All of the acts] were fabulous and there was a lot of variety.”

“It was Mara’s brainchild,” said Levi Smucker, who conducted the choir in the winning act. “That was by far the most work I’ve ever put into a Kick-Off.”

Emily Trapp and Martin Flowers came in a close second with “Somebody That I Used to Know” and “Feeling Good.” The duet, a crowd favorite, received one of the loudest ovations.

Bekah Groff, accompanied by Katrina Evans, finished in third with the song “That Wasn’t Me.”

Even though the top three acts were musical pieces, contestants offered a broad range of talents, including beat boxing, a comic routine, spoken-word poetry and several varieties of dance.

“I think it’s a shame we had to have a competition,” said Barnett.  He said that the judges each ranked their personal top three acts, added up the totals and mathematically came up with the winners.

This was the first Kick-Off where audience members were encouraged to use electronic devices. Throughout the evening people sent messages to a special Twitter account set up for the show. Sammy Rosario shared some of the tweets in between acts and CAC picked five of the best to show to the audience during the judge’s deliberations.

“It all paid off very well,” said DaVonne Harris, director of student activities. “The night was magical. The vibes were positive and everything fell perfectly into place.”