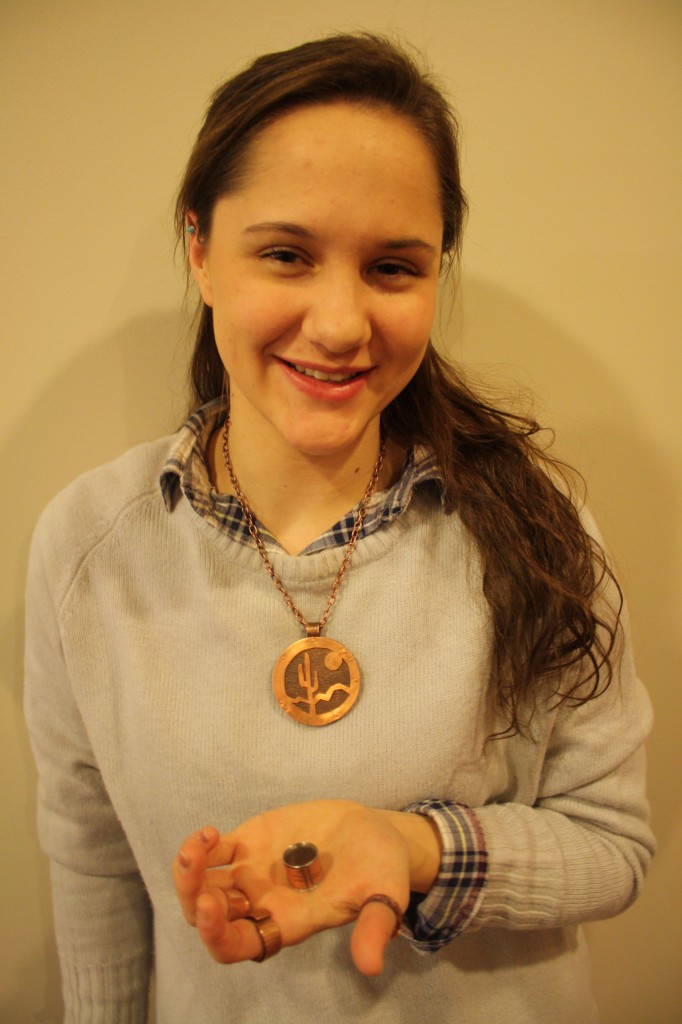 Bluish-green rings stain the skin of Mandy Schlabach’s middle finger on both hands. She has removed the thick copper rings and fingers them, pointing out where the metal didn’t solder properly. “I messed them up but I can wear them anyway,” Schlabach said, smiling down at the jewelry.

Schlabach, a sophomore, has a wide resumé with the arts.  She has dabbled in acrylics, ceramics and most recently, jewelry making. Her passion, however, lies with watercolors. As an art major she gets to try a variety of mediums, but her concentration is watercolor painting. “I enjoy watercolor because I enjoy how when I make a mistake it turns into something beautiful,” said Schlabach. “The unintentional becomes the most important part of the work.”

A reoccurring theme in Schlabach’s works is eyes. She uses them as both the focal point and as a concealed subtlety. “Maybe I’ll be painting a landscape of just tress and put in hidden eyes,” said Schlabach. Schlabach said her fascination with eyes may have stemmed two years ago during her travels on her mother’s sabbatical. After visiting Tanzania and Costa Rica with her mother, Schlabach had a greater appreciation for all that eyes represent. She found that “greeting there was more intentional and very important.”

“I became more aware of when I make eye contact and when I don’t,” Schlabach said.

Eye contact was the spark that led her to consider the deeper connotation behind eyes. “Eye contact is when you really make a connection with people,” she said, “ where you can really see into them.”

Schlabach is inspired by people–their stories and their struggles. For example, over May term last year Schlabach took a watercolor class where the students were required to illustrate a world issue. Schlabach chose to focus on immigration. She had just finished the book “The Devil’s Highway” by Luis Urrea, which chronicles 14 immigrants and their journey across the desert.

A passage that resonated with Schlabach was a description of what happens to the human body when you die of heat exhaustion. Schlabach’s watercolor was a haunting depiction of a man crumbling due to the heat. The ever-present eyes make an appearance on the left side of the painting, with a pair of eyes turning pink and then red as the blood vessels explode.

Schlabach submitted a piece to the Lion and Lamb art show: pendants created for her jewelry making class. The pendants are made up of magazine clippings. It was created to depict the imbalance of power. “I thought about power and how it is never equal,” said Schlabach. You can see Schlabach’s work and other pieces in the art show in the basement of the Good Library.