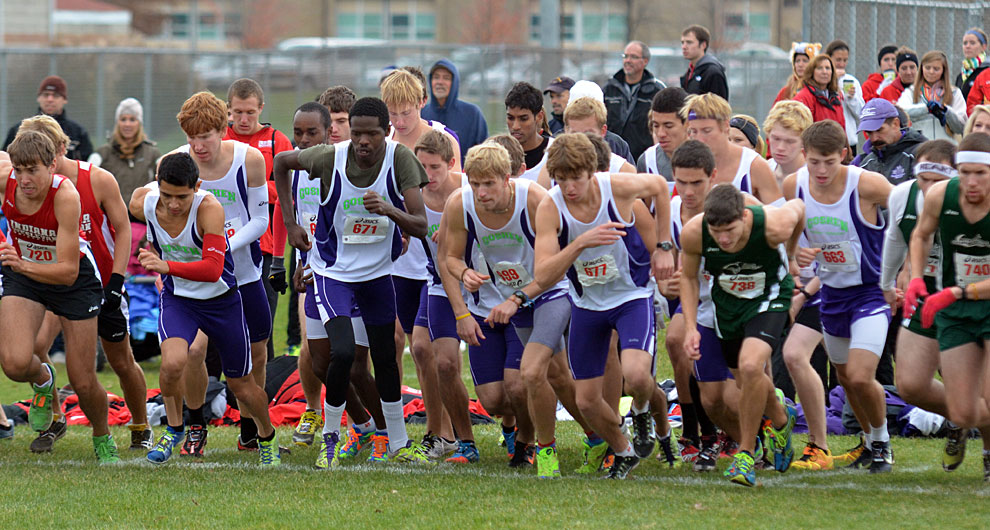 Neither the team nor the leading individual, Billy Funk, a senior, met the first goal — the Leafs were third, finishing behind No. 21 Indiana Wesleyan and No. 16 Spring Arbor, while Funk finished sixth in 26:01.8. Jordan Smeltzer, a sophomore, was second on the team and seventh overall after finishing the 8-kilometer (4.97-mile) course in 26:03.3. By virtue of their finishes, the two individuals qualified for nationals.

Indiana Wesleyan won the team meet with 24 points, followed closely by Spring Arbor with 28. Had the Cougars qualified for nationals, two more Maple Leafs (Daniel Zelaya and Moses Kaelo) would have qualified as well, because individuals who advance with a team cannot take individual-qualifier spots as well.

But on Monday, Nov. 5, the final coaches’ poll was released. Each conference champion qualifies for nationals as a team, followed by the next nine teams in the poll who would not otherwise have qualified. Despite their strong showing two days earlier, the Cougars dropped eight spots to No. 24; that made them the eleventh-best at-large team and eliminated additional Goshen athletes from contention.

The Maple Leafs’ national qualifiers, therefore, will be limited to the senior from Gallup, N.M., and the sophomore from New Paris, Ind. Smeltzer travels to the championships for the second straight year after replicating his seventh-place conference finish. Funk will be making his first appearance at nationals.

The final race of the season is held Saturday, Nov. 17 at the Fort Vancouver National Historic Site in Vancouver, Wash., which is in the final year of a two-season contract to host before the event moves to Lawrence, Kan. in 2013. The women’s race begins at 1:30 p.m. Goshen time (10:30 a.m. locally), followed by the men’s race at 2:45 p.m. EST (11:45 a.m. PST). Official results will be known later in the evening after the window to appeal closes.

In finishing their season Saturday, the women finished eighth in the ten-team meet. Ali Hochstetler, a sophomore, led the Maple Leafs by completing the 5-kilometer (3.11-mile) circuit in 19:31.6. Despite running in a postseason meet for the first time since high school sectionals in 2009, Hochstetler missed the national qualifying standard by less than 20 seconds and finished only 9.2 seconds off the all-conference podium. She and 34 other Maple Leafs (16 women, 19 men) will be eligible to return in 2013.

First, though, 2012 must conclude. The season will end Saturday in the Pacific Northwest afternoon; the 2013 track season starts in 71 days on Friday, Jan. 25 and concludes with nationals on Memorial Day weekend.