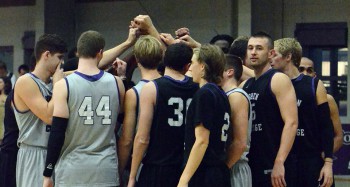 The Goshen men’s basketball team was picked to finish tenth in the Crossroads League preseason poll, with the rest of the league unsure how the Leafs would respond to the loss of four starters. On Tuesday night, at least, the score spoke for itself.

Tavo Parral, a senior, came off the bench for a game-high 16 points, shooting 4-for-6 from three-point range as Goshen defeated Aquinas 76-66 in both teams’ season opener.

Parral’s career high led a balanced attack for the Leafs, followed by 15 points apiece from Kyle Davis, a senior, and Stefon Luckey, a sophomore. Matt Glick, a junior, and Mathew Martin, a senior, led Goshen in two ways: on the glass, with seven and five rebounds respectively, and in the huddle, as they were the only starters to play on last year’s 19-14 squad.

All eight players who saw action for Goshen scored; each player had at least one rebound and played double-digit minutes.

The visitors jumped out to a 5-2 lead after they scored two of the first three field goals in the game’s opening 90 seconds. Martin and Davis had five points apiece to key a 13-2 run that gave Goshen a 15-7 advantage four minutes later, but Aquinas came back with a 9-0 streak of their own to lead 16-15 with 11:43 left in the half. That would be the Saints’ last lead of the night.

Goshen responded by scoring 11 consecutive points, eventually stretching their lead to 14 points before leading 49-37 at the intermission.

Some observers thought that Goshen would look for perimeter play, owing to their relative lack of size in the post. In a halftime interview on 91.1 The Globe, second-year assistant coach Steve Case said that the team had expected the Saints to pound the ball inside much more than they did in the opening stanza.

Aquinas cut Goshen’s lead to 51-50 five minutes after halftime. But again Goshen made a run, with Parral, Martin, and Stefon Luckey scoring to re-open the lead to eight points at 58-50. From there, the teams were separated by two possessions or more until the final horn.

The Leafs made a living on the perimeter, shooting 53 percent (28-for-53) from the floor and 42 percent (10-for-24) from three-point land. For a team that boasts only one player (Trevor Commissaris, a first-year) taller than 6’7″, the Leafs acquitted themselves well on the glass: Aquinas only outrebounded Goshen 26 to 25.

Goshen returns home for three more games in the next six days. Thursday night, the Leafs host Kuyper College. Calumet College of St. Joseph follows at 3 p.m. Saturday, and Siena Heights comes to Gunden Gymnasium on Monday. All three games are slated for broadcast on 91.1 the Globe.