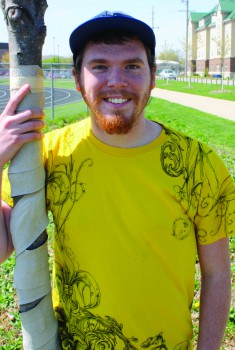 When I begin to think about my future, and what I want to do after I graduate, I become really nervous, and I just stop thinking about it because it scares me so much. I don’t know if I want to be a teacher, if I want to go back to China for a while, or if I want to continue on to grad school, to receive a Ph.D. or an M.F.A.

But what I know I can’t do is return to Goshen College to teach, because of one small fact about me: I am openly gay. Yes, that’s right; I am gay and I don’t mind telling anyone. And that is the reason I will not be receiving any job offers from my alma mater, no matter how qualified I am for the position. I even know of qualified professors being turned away from GC because they are openly gay like me, and I am sure there are other students on campus who are aware of more LGBTQ professors being turned away than I do.

I know that hiring LGBTQ professors is a long-standing debate, and all of the pressure comes from Mennonite Church USA. Since GC is affiliated with Mennonite Church USA, it would have to be a decision made by the whole church to accept LGBTQ people into the church and into leadership roles before I would be able to see change at GC.

Of course, the idea of including LGBTQ staff members, and even incorporating an LGBTQ club, is not new to GC. Back in 1994, there was a strong pull from what was then called the LGBA (Lesbian, Gay, Bisexual Alliance) and Advocates to get LGBA club status. At that time, unfortunately, the authorities at GC did not believe that homosexuality should be shown as an endorsed way to live, since the official stance of the Mennonite church was (and still is) that sexual relations belong only between a man and a woman in a heterosexual marriage.

Even today, when most of the student body accepts LGBTQ peers, there is no recognized GC club for LGBTQ students. There is a group called Prism, which is a morphed version of the LGBA and Advocates together. Advocates is its own club, but is still active in accordance with Prism.

However, Prism is not listed under clubs, there are no pamphlets around campus to tell students what Prism is about, and often I wonder if new LGBTQ students are afraid to attend the meetings because they do not want to be called out on being gay. I can tell you, the people at Prism are genuine folks who will help anyone out, whether they are out LGBT, or whether they are unsure of their sexuality. Talk to me, and I can put anyone in contact with the right people to make an appearance at Prism happen.

Now, I can understand why the students don’t want to come out. I didn’t come out until after I graduated from high school, and even then I was worried about how my college experience would be. And I have to say, the student body (and most of the English department professors) are perfectly okay with me being gay, and they even support me! Isn’t that just the best news?

But, to bring it back, with the current hiring policy of no out LGBTQ professors at GC, I will not be able to teach in the same English department where I spend most of my time. I will have to wait until the hiring policy is changed, which would be when the Mennonite church begins to accept homosexuality, or I will have to find a job at a different university that will not discriminate against me because of the way I was born. And frankly, I am most definitely hoping for the first option.