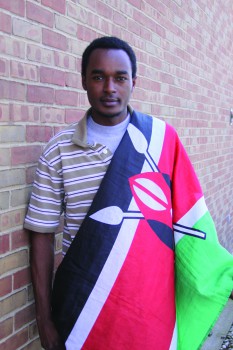 Oscar Joses Kirwa, a sophomore, is an active member of the International Student Club (ISC), involved in midnight worship and is a key member of the men’s cross country team. Kirwa is a business and global economics major.

Facts about the country (in a box):

Size in comparison to any US State:
Kenya has a total area of 224,962 square miles, which is roughly twice the size of Nevada.

Cost of round trip flight:

1. What do you miss the most from Kenya (Besides family):

I miss the good weather, fresh air and mountains. I also miss the food a lot.

I like it that some people are generous and very friendly. I like the fact that people will respect your choices. I also like the way institutions such as Goshen operate; they are very flexible and are very organized.

I do not like the level to which people value material possessions. I do not like the fact that society is set up in such a way that people tend to overwork themselves in order to get money, thereby losing the content of life or idolizing money.

I do not like the manner in which people behave sometimes in a way that makes them seem fake. Sometimes people may talk to you one time and another time they will not even say anything to you; it is as if you had never met before.

I do not like the situation of some of the black population in the United States. From my travels around the country, most of them are suffering and are living in conditions that are not good.

3. What is your favorite childhood experience:

My favorite childhood experience is swimming in the River Nzoia, which has a lot of crocodiles. We swam there even knowing that there were crocodiles.

4. What inspired you to come here:

Part of my dream was to study and at the same time become an athlete. I was originally to study in the UK, but I found out that it was difficult to do both over there, whereas here in the U.S. I could study and also actively participate in athletics.

5. What are some differences between the American and Kenyan cultures:

There is a saying that says, “It takes a village to raise a child.” Therefore, it is the responsibility of the wider community to take care of the younger generation and not only their family. I feel as though this does not apply much here in the U.S.

In Kenya, our traditions stipulate the way of life; that is, they define one’s role as a man, child, etc. One does not have to go to school to learn these things, but here in the U.S. I feel as though one has to go through school to know more about ethics and morality issues.

In Kenya people value the wellbeing of others, even strangers; no man is an island and there is no such thing as “I am minding my own business,” or “every man for himself and God for us all.” This is so because what affects one person will directly or indirectly affect those around.

6. What does a typical day look like for you:

We wake up and drink tea in the morning, then go to work or school. In the afternoon we have lunch and in the evening have dinner with the family.