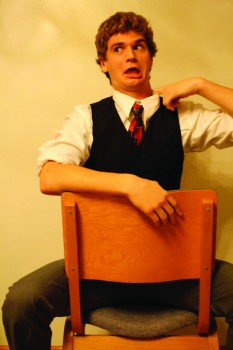 Hello, my name is Brian O’Leary and I’ll be one of your funnies writers for this week’s Record. When I was approached to write an article, I sincerely thought that Daniel Penner was coming on to me.

“Write an article?” I said. “I didn’t even know there was a school newspaper!”

Then I remembered the Conscientious Objector. Imagine my surprise when I learned of The Record! Anyway, as it turns out Daniel was not trying to get into my pants. Instead, he honestly was out of options for submissions. So, being the kind gentleman that I am, I told him to get out of my room and never ask me for anything again.

So, here I am, writing an article for Daniel Penner about procrastination. So of course I traveled directly to the Internet. Speaking of which, have you guys heard of this new website called Utube.com?

There are all these videos on it, videos about everything from Carmen Electra to babies! Of course this was the place where I chose to begin my research on procrastination. It’s even free to sign up! So I did. All you need is a credit card number, cell phone, and your social security card; it’s super simple! I found so much useful information about procrastination there.