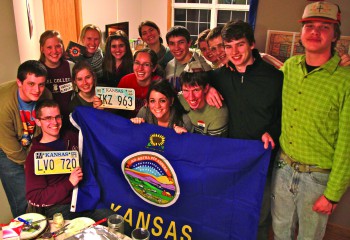 If you were on “Who Wants to Be a Millionaire” and the million dollar question was “When is Kansas Day?” would you be able to answer correctly? Perhaps not.

Kansas Day is Jan. 29, the day in 1861 when Kansas joined the United States. There are a select few students on campus who would win the million, and those students are part of the newly formed Kansas Club.

Kansas Club was created by seniors Ben Baumgartner and Daniel Penner, both natives of the Sunflower State. Penner and Baumgartner began the club mainly for the purpose of celebrating Kansas Day, and the idea for a legitimate club surfaced. “(Kansas Club) was just an idea that I had,” Penner said, “but then Ben became really serious about it.”

Perhaps many of the readers are at this point thinking, “I thought this was a Kansas Bible Company (KBC) fan club,” as I did when I first heard about the club. Penner, however, set the record straight.

“I’m going to go out on a limb to say that most people from Kansas do enjoy KBC songs now and again,” Penner said, “but (being a fan club) is not the intended purpose.”

The club’s first meeting was on Jan. 29 in celebration of Kansas becoming the 34th state, and during the celebration there were activities to remind the members of their homeland.

The various activities included, but were not limited to, eating traditional Kansan food (mostly of Russian Mennonite heritage), sticking Post-it notes on a map of members’ hometown cities, and singing all four verses of Home on the Range, the state song.

One of the more intriguing activities the club participated in was dressing up as famous Kansans. Now, you may be asking, “Who is famous from Kansas?” There are in fact many well-known faces: Kirstie Alley, Dwight D. Eisenhower, Amelia Earhart and the founders of Pizza Hut. Dennis Rader, the infamous BTK (bind, torture, kill) serial killer is also from Kansas. Although Penner dressed as Vernon Smith, winner of the Nobel Memorial Prize in Economics, many at the shindig believed he better resembled the serial killer.

There are not any scheduled meetings for the future, since the club was initially created to celebrate Kansas Day, nor is there a faculty sponsor for the group. This is in part due to the rigorous selection process for the club. Members must have lived in Kansas for at least two years, so Hesston transfers are not eligible.

For the faculty adviser position, Penner and Baumgartner have someone in mind. “Paul Keim lived in Kansas for a few years, so he meets the requirements,” said Penner of seeking out Keim.

Although there are no more planned meetings, members who went to the Kansas Day celebration have expressed interest in continuing the club. Isaac Fast, a sophomore communication major, stated his joy at the possibility of future meetings. “There is no doubt that Kansas Club will rise above other clubs,” said Fast, “because let’s face it, who doesn’t love people from Kansas?”

If the Kansas Club does continue, and does not turn into a KBC fan club, possible meeting places have been discussed. Penner’s apartment was the location of the first meeting, but he tossed around the idea of trying to have meetings in the prairie area, since it would remind the members of their homeland.

Students who qualify to be part of the Kansas Club and are interested in joining can contact Penner or Baumgartner for more information on possible future meetings.