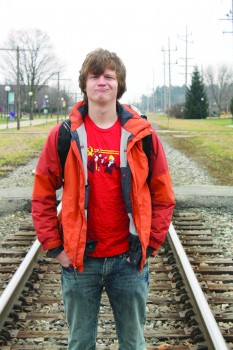 In 2008 when I was a first-year at Goshen College there was rumor of plans for a tunnel to be built under the train tracks connecting the east and west sides of the Goshen campus. Several tentative dates for the construction of this tunnel came and went, alas with no tunnel. However, this week in the Communicator there was a video of a virtual tour of the proposed tunnel, which makes the project seem less fictional and futuristic, and more real. While for practical reasons the tunnel is a great resource, I will miss several aspects of the good old tunnel-less days.

Trains blocking the tracks can be a major annoyance, especially when they are preventing you from getting to the Rott before it closes. However, in some ways the threat of a train blocking the tracks serves as valuable training (harr harr) for life. When I was living in the dorms it seemed that countless times some sort of sixth sense alerted me to the coming of a train, allowing me to get across the tracks before it was too late. This sixth sense can be honed in to other higher awareness functions such as never missing your significant other’s birthday or warning you when your Netflix queue is almost empty.

Furthermore, the threat of a train stop keeps us in top physical condition. Most of us have at some time or another been spotted sprinting across campus in order to beat a train. Such conditioning prepares us for real-life crisis situations, such as getting to China Buffet in time for their lunch special. In addition, trains can provide comic relief. Many of us have encountered the occasional “faux train” when we hear a train coming and sprint to try and beat it across the tracks, only to realize it is just two train-less engines being transported somewhere. This is really hilarious to witness unless you are the one who was trying to beat the “train.”

Finally, a stopped train represents a valuable social situation. Waiting for a train is also a great way to make some new friends. I, for one, have had some really great conversations with others who were also stopped on the same side of the tracks as me. Not only are you forced to be in the same physical area as your future friend, you have a common topic to talk about and break the ice. If you need some pro conversation starters, try this script:

You: I hate it when trains stop like this.

Future Friend: Yeah! Me too!

You: We have so much in common! We should be friends!

So the next time a train is coming, remember: you won’t always have these wonderful opportunities to enhance your life through trains like you do now. Savor these moments, because one of them might be the last time you are able to say “Sorry I’m late. I was stopped by a train.”

John Harder is a senior mathematics and history major